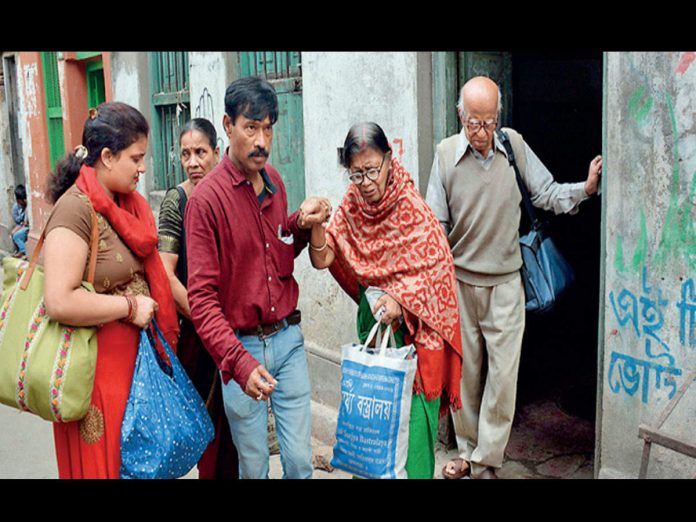 KOLKATA (Metro Rail News): As tunnel-boring machine Urvi went into the cave-in zone on Tuesday, a total of 21 residents from Gour De Lane off Bowbazar were evacuated. The range of subsidence that found out the buildings fall like a pack of cards begins here. KMRC, the agency executing the Kolkata East-West Metro project, had commenced evacuation on Sunday by shifting twelve residents.

Kolkata Metro Rail is extremely cautious this time. Nobody wants a repeat of 31 August when the TBM digging the westbound tunnel of the Kolkata Metro project hit an aquifer and water flooded the tunnel, bringing with it sand and soil. Several buildings had fallen and many others were damaged in the subsidence that could be arrested only after twelve days. “On that time, our house was destroyed even though the TBM was digging at a distance. This time, the tunnelling will be carried out right below our building. We all are extremely worried,” stated Suneet Sarkar of 4B, Gour De Lane.

The Durga Pithuri Lane and Shyakrapara Lane were the worst-hit. Buildings of Gour De Lane nearby Shykrapara Lane were also affected. “The last time we had to wait in a hotel for around 28 days. When we got back, found some cracks in the walls of the house,” the 68-year-old told. “The Kolkata Metro Rail Co. notice tells we can return on Sunday but so many people haven’t been able to return on the scheduled date. The tunnelling we were said, is slow and hence the delay,” Sarkar said.

Although 5 homes can be evacuated Somnath Banerjee of 2B Gour De Lane denied to leave his house. “I shall not move until my nephew gets the Rs five lakh compensation. He denies to pay the electric bills and house tax because I got the money and he didn’t,” said Banerjee.

Urvi’s twin Chundee which hit the aquifer is presently lying defunct below Durga Pithuri Lane. It was building the westbound tunnel. Urvi was building the east-bound tunnel also had dug till the Nirmal Chunder Street-Chaitan Sen Lane crossing at the same time of the tunnelling fiasco and had been stuck ever since.

As per a Calcutta high-court order to continue tunnelling works, it continued digging on Feb 18. It has made around 1,100 rings till now. As the TBM burrows an industrial robot places segments of a 1.2meter extended pre-cast concrete ring. And thus a 12meter stretch of the tunnel gets built regularly. But thanks to Urvi’s slow progress, only around 100meter has been covered in the last fortnight.