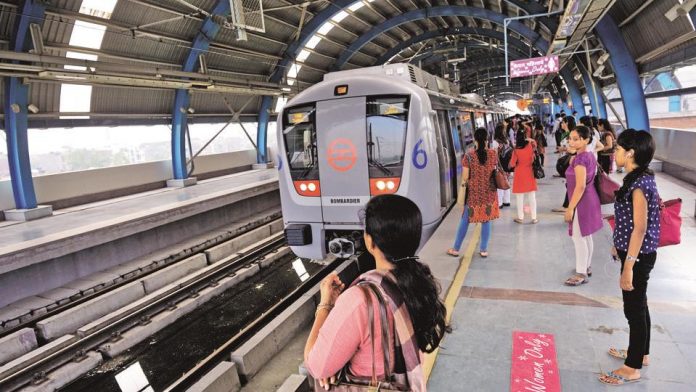 DELHI (Metro Rail News): On June 3 the Arvind Kejriwal-led Aam Aadmi Party (AAP) government in Delhi announced that it was considering making Delhi Metro and Delhi Transport Corporation (DTC) buses free-to-ride for women. While most women’s organizations and women commuters, in general, welcomed the move, it has attracted criticism from the AAP’s political adversaries who have described it as an act of sheer populism with an eye to the Assembly election in Delhi, scheduled to be held early next year.

Hardeep Singh Puri Union Minister for Housing and Urban Affairs of the Bharatiya Janata Party (BJP) was among the first ones to denounce the proposal, calling it “disruptions”. “Mr. Kejriwal has confused people because this is not how you give schemes.

Central government needs to be on board. DMRC [Delhi Metro Rail Corporation] didn’t get any proposal from the Delhi government. Delhi government already is running out of funds; they are in debt. I don’t know how Kejriwal is planning to give Metro rides for free,” the Minister said, sharing the apprehensions of many people, including women, who are wondering whether the scheme is economically viable to implement.

The Delhi government has made it clear that it is not banking on the Centre to bear the budget deficit likely to arise from a drop in revenues of the DMRC, which early estimates put at anything between Rs.700 crore and Rs.1,100 crore a year.

The AAP vociferously justified the announcement, arguing that it would encourage more women to use the Metro and DTC buses, considered safer than shared autos or cabs.

“The safety of women is the most important for the AAP government. Keeping in mind the safety of women, the government has decided that in Delhi all Delhi Transport Corporation and cluster buses and the Delhi Metro will be free for women so that maximum number of women can use public transport.

Public transport is said to be the safest for women. Due to the increase in Metro prices, they are not able to use these services,” Kejriwal told the media recently.

Yet, economic concerns remain. The annual budget has been passed, with the funding for specific departments already earmarked. According to the Delhi government’s initial assessment, it will have to bear an additional expense of around Rs.800 crore to sponsor the fare waiver.

One of the options available to the Delhi government is to use the Consolidated Fund of Delhi for the additional expenditure, but that would require the approval of the Central government. It is improbable that the BJP, which registered a lead in 65 of 70 Assembly segments in the just concluded parliamentary election, would agree to what is likely to bring windfall electoral gains for its closest adversary in the Union territory.

The Delhi government also faces a likely roadblock from the DMRC board, whose 13 directors take a call on matters pertaining to the Delhi Metro. In the past, the AAP has been unable to get the DMRC board to reduce the Metro fares. Delhi’s Deputy Chief Minister Manish Sisodia has stated on previous occasions that the AAP government wishes to slash Metro fares by 25 to 30 percent, but the DMRC board has seemingly given this a red light.

Several women’s organizations have welcomed the fare waiver proposal. Their argument is that women are not equal beneficiaries of economic development and are still struggling for equal pay for equal work.

Mariam Dhawale, general secretary of the All India Democratic Women’s Association, said that women were the “worst hit by economic policies” and they needed some incentives. “It is now official that the unemployment rate in our country is at a 45-year low. What has escaped notice is the fact that women are far more at the receiving end as a result of the loss of jobs. They have been pushed to the unorganized sector where exploitation is very high. In any case, the gender-based employment ratio is tilted heavily against women. In this scenario, any economic relief for women is always welcome,” Mariam Dhawale told Frontline.