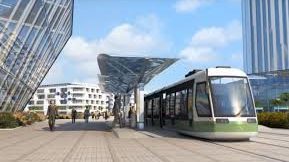 Abu Dhabi Metro is a planned metro line that will be part of a larger transit network for the city of Abu Dhabi.

18 will be kilometers long when the entire transit network is complete, including an 11 kilometer (131 mile) underground metro line, two light rail lines and a fast bus line. 1 of the network. The stage (60 kilometers (37 miles)) must be completed by 2020 and should be done later in the next stages (70 kilometers).