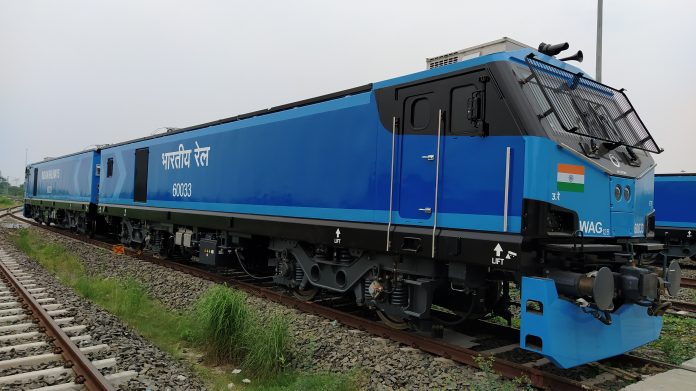 NEW DELHI (Metro Rail News): Alstom has started deliveries of the 12000 hp, WAG-12B electric locomotives which are built by Alstom, certified by Ministry of Railways & Commissioner of Railway Safety (RDSO), to Indian Railways, that is all set to revolutionise freight logistics in India. These WAG 12B engines are the most-powered locomotives that would run on Indian rails.

The entry of WAG 12B (e-loco) would allow faster & safer transfer of heavier freight trains capable to haul ~6000 tonnes at a top speed of 120 km/h. Planned to be deployed for services on Dedicated Freight Corridors (DFCs), these e-locos would raise the average speed of freight trains in the country by at least 20-25 kmph.

Equipped with Insulated Gate Bipolar Transistors (IGBT) based propulsion technology, it will begin to significant savings in energy consumption because of the use of regenerative braking. Further, this progress would not only bring down operational expenses but also decrease the congestion faced by Indian Railways.

The project has a strong impetus on indigenous manufacturing with 90% localization and as per the delivery schedule, hundred locomotives would be delivered annually.

Currently, Alstom is executing metro projects in various Indian cities, including Mumbai, Chennai, Kochi & Lucknow, where they are supplying rolling stock manufactured out of their state-
the of-the-art facility in Sri City.

Managing Director of Alstom India & South Asia said that Alstom is happy to begin delivery of the electric locomotives to Indian Railways. Initiation of induction into the IR fleet testifies our commitment towards the country. This is a revolutionary product that would be faster, safer & eco-friendly.

Also, it is scripting a fresh chapter for India’s sustainable mobility journey & we are pleased to be partnering in this.

Spread across 250 acres, with a production capacity of 120 locomotives every annum, the Madhepura industrial site is organised to international standards of safety & quality. According to the plan, multiple ultra-modern maintenance depots in Saharanpur & Nagpur would ensure high service availability of the locomotives.

The Saharanpur depot is previously functional and the Nagpur is under construction. Equipped with ultramodern features, these depots would play a critical role in maintaining India’s most advanced freight locomotives at significantly lower expenses.

India’s most powerful locomotive, the WAG12B has joined the huge network of Indian Railways. WAG12B is equipped with 12000 HP and has been manufactured by French company Alstom.

The locomotive began its services from Pt.Deen Dayal Upadhyay railway station in Uttar Pradesh. The locomotive is capable of taking heavy consignment of freight and will be used in the Dedicated Freight Corridor(DFC).

The loco is named WAG12 with Number 60027. The train departed from DeenDayalUpadhyaya Station at 14:08 hrs in long haul formation for Dhanbad Division of East Central Railway, consisting of 118 wagons which travelled from Pt DeenDayalUpadhyayaJn to Barwadih via Dehri-on-Sone, Garhwa Road.

Praised as the largest Foreign Direct Investment (FDI) projects of Railways, the Ministry of Railways and Alstom came together in 2015. An agreement worth 3.5 billion Euro was signed to manufacture 800 electric locomotives for freight service and its associated maintenance.

The new locomotive will not only bring down the operational costs for railways but will also reduce the congestion faced. The project is expected to give a boost to the government’s “Make in India” initiative.

More than ₹2,000 crores has been invested in the project already with one maintenance depot already established in Saharanpur. Work is starting on the second one at Nagpur.

More than 300 engineers from India and France are working in Bangalore, Madhepura, and France on the Project. In two years time, more than 90% of the parts will be manufactured in India