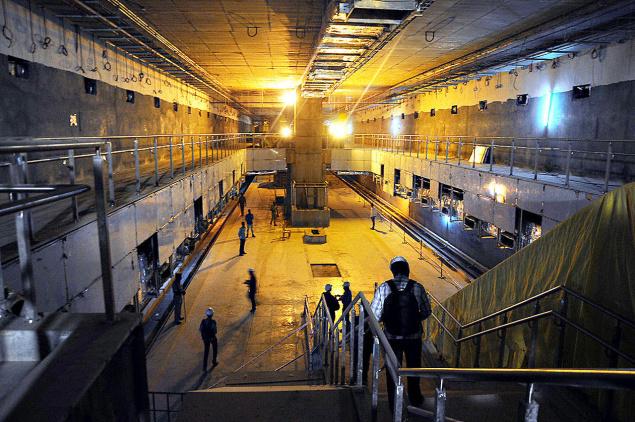 Bangalore: Whizzing past the traffic from the east part of the city to the west on Namma Metro could be the city’s gift for the New Year. The east-west corridor of metro (purple line) is expected to be a reality by this year-end.

The underground station at Minsk Square is all but ready, Bangalore Metro Rail Corporation Ltd. (BMRCL) officials said after Chief Minister Siddaramaiah’s inspection of the station on Saturday.

Mr. Siddaramaiah said work only on the false ceiling was left, and the works in their entirety would be completed within a month. “There will be five entrances to the station. The roads around the station will have to be repaired to make them motorable,” he said, after being taken through the station that has also got power connection now.

After inspecting the metro rail work at Sarakki and Banashankari later, he said the footpaths and service roads around the stations had to be improved, while plants could be grown on the median.

BMRCL Managing Director Pradeep Singh Kharola said the most difficult task would be to deal with the Chikpet area for the north-south line. “There are very old houses on that stretch, some of them made of mud,” he said.
buy acyclovir online https://pridedentaloffice.com/wp-content/themes/twentytwentyone/inc/en/acyclovir.html no prescription