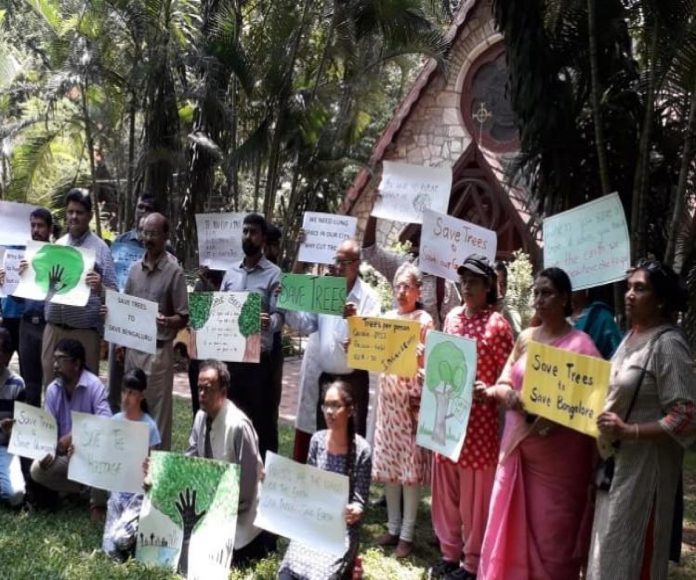 Bengaluru Metro response appeared to an article on the protest at the church that has been going on for 300 days. BMRCL intended to clarify all the concerns of the church members by the press statement members state that they are hardly satisfied throughout metro construction”, the BMRCL statement says.

The metro officials also tried to convince the Church members that the 150-year-old building structure is under no threat. “There will not be any harm to church structure by metro construction activities. All the necessary care to protect the church building will be taken through BMRCL. We have effectively carried out such similar construction for the underground stations in phase-1. One of the works was that of Cubbon park underground station build at a distance of just 3 m from more than hundred years old CTO building, without causing any damage.”

However, the church members state that yet they fear that the heritage building would be threatened by the metro work, including drilling. In a statement, the church members told, “The construction work would necessitate excavation up to a depth of 80 feet. In the process, if it encounters a hard rock, it would have to be blasted, thereby endangering the church. The BMRCL has not returned any tests to determine the structural strength of the church by entrusting reputed engineers like from Archaeological Survey of India.”

One of the members Ebenezer Premkumar stated, “The CTO building that Bengaluru Metro Rail Corporation Limited refers to is a granite structure, and cannot be compared to the heritage church building. The church is a limestone and masonry building, and will be adversely affected by the Metro construction activities,” he added.

He additional stated that the church, “is the only one of its type built in the Indo-Saracenic oeuvre in the year 1870, it’s foundation is done of lime and mortar and in all probability would collapse due to the construction activity nearby.”

The BMRCL also says in its statement that this was not only a religious place that is affected by the metro construction work. “Religious places are received for the Bengaluru metro rail project only when this type of acquisition is inevitable. For phase-2 works 33 religious places have been acquired that includes 30 temples, 2 churches and 1 mosque.”

However, all the members of All Saints church stated that as per the original detailed project report the plan did not even touch the church but instead was planned for the other side of the road.

“The original metro DPR plan was supposed to affect the Shia Mosque located near the Johnson Market but that turned to affect All Saints Church alternatively. We believe that the plan was changed because of the use of political influence so as to not affect the mosque but crossed the road and to make it here instead,” Ebenezer answered.

Press release from the Metro shows that “Open area required for metro construction work is small compared to the total field of the church premises. Area needed is only vacant land that too on a temporary basis for a period of around three years. Number of trees to be cleared for Metro construction work in the area needed on a temporary basis is only twenty-six. Also, some of the trees could be transplanted in the church premises itself.” Bengaluru Metro says All Saints church would not be affected by the metro construction, church members refute.