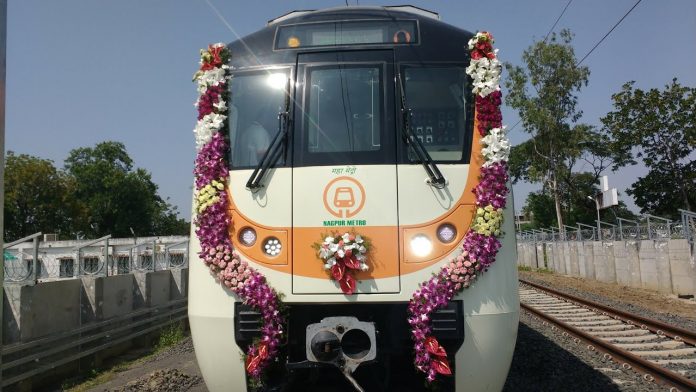 NAGPUR (Metro Rail News): MahaMetro has set a target of holding a trial run on Sitabuldi-Lokmanya Nagar stretch (Reach-III) before August 15. The civil work of viaduct is over while that of erecting overhead electrical (OHE) equipment and track laying is in the final stages. The 25KV power cable for this section will be charged on August 1. Fifteen coaches will reach the city on August 5.

Currently, three stations on this reach – Lokmanya Nagar, Subhash Nagar, and Institution of Engineers – are almost complete while the top level of Sitabuldi Interchange will be ready by August end.

Commissioner of Metro Rail Safety (CMRS) will be invited for inspection after this. A Metro official said that the agency would do it best to start Rani Jhansi Square station too.

MahaMetro has set a target of starting commercial operations on this stretch by mid-September. If it wants to get the train flagged off by politicians, then it will have to hurry up a bit. In 2014, assembly elections were declared on September 12. Unlike Reach-I (Sitabuldi-Khapri), Metro officials plan to start both up and down lines together.

Similar to Reach-I, the initial speed will be 25 kilometers per hour. The speed will increase after the communication-based train control (CBTC) system is fully operational.

Metro officials expect a better ridership on this reach than Sitabuldi-Khapri stretch as many people work in Hingna MIDC and there are a lot of educational institutions on Hingna Road. A Metro official said that work of construction of Reach-III viaduct was done very fast. “The work had begun in December 2016. We completed the 11-kilometer section in July 2019, which is 32 months.

It has 393 piers (columns) and 3,564 viaduct segments. All the segments were cast in Hingna yard,” he added. “A challenging task on this reach was launching segments above Gowari Flyover at Rani Jhansi Square. This was done successfully without any hassles,” said the official.

This reach will later have some attractions for Nagpurians. Metro has created a mini-forest Little Wood near Vasudeo Nagar Metro station while Ambazari Lake View station will have a viewing gallery from where you will get a very good view of Ambazari lake.