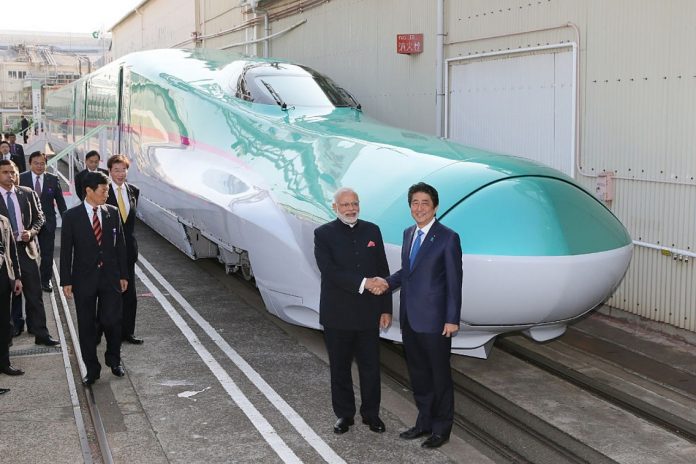 GUJARAT, INDIA (Metro Rail News): In Gujarat state assembly released information that only around 40% of the land has been required for the bullet train project between Ahmedabad-Mumbai. The state govt tabled the third annual report 2018-19 of the central government’s flagship project. [email protected]

On Monday, Gujarat Deputy CM Nitin Patel tabled the 2018-19 annual report of the ‘National High-Speed Rail Corporation Limited’. As per the report, only about 40% of the land requirement for the PM Narendra Modi dream project bullet train between Ahmedabad-Mumbai, is acquired. The acquisition is based upon the joint measurement survey. The total land needed for the complete project is 1,380 hectares, where 939.69 hectare comes in Gujarat, 431.2 hectare comes in Maharashtra along with 8.70 hectares in Dadra and Nagar Haveli.

The NHSRCL has envisaged integration of commuter terminals of the bullet train with the Railways and Metro at Sabarmati and Ahmedabad. For this integration, many Railway facilities will be needed to be shifted. Also, electrical overhead lines and civic utilities such as water and Drainage pipes, roads, telecom cables and infrastructure would also be needed to be shifted to accommodate the bullet train network.

NHSRCL company has obtained many environmental clearances like the CRZ clearance across Narmada river in Bharuch district, the wildlife clearance for Thane Creek Flamingo wildlife sanctuary and the Sanjay Gandhi National Park and Tungareshwar Wildlife Sanctuary. NHSRCL has also carried out tree transplantation at many areas in Ahmedabad. About 3,000 trees would be axed for the project in Ahmedabad as per the project.