Although much lesser than expected numbers, in early 2020, CMRL had an average of 1.25 lakh passengers a day before the closure was announced a year and a half ago. The Chennai metro authorities were frustrated as passengers stopped taking rides.

In the past few months, with the number of cases has plummeted, more and more passengers are returning to Metro Rail, the number sometimes touching even one lakh passengers during the day. To increase these numbers and eliminate losses due to closures and increase revenue, CMRL has invited firms to set up retail outlets in 15 elevated and underground stations, including Alandur, Little Mount, New Washermenpet, Tondiarpet, Wimco Nagar, St. Thomas Mount, Kilpauk, Pachaiyappa’s College, Shenoy Nagar, Nehru Park, Thirumangalam, Anna Nagar East, Anna Nagar Tower, Ekkatuthangal and Nanganallur Road.

According to officials, the bidders (chosen ones) will be given spaces in conjunction with (where tickets are issued) and road standards. Depending on the size of the station and the space available, kiosks will be provided for 10 to 20 sq m.
Although there are kiosks, a considerable area will still be taken at most stations. 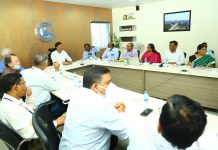