CHENNAI (Metro Rail News): CMRL has installed 500 Lts. capacity RO Drinking Water Plant in Central Metro Station for Public use as free of cost. As a part of providing world-class infrastructure facilities to the people of Chennai.

CMRL has installed at the above location so that the maximum number of Public can utilize Purified drinking Water especially during summer seasons.

CMRL has planned to install similar kind of plant in some more Metro Rail Stations also in near future for public free service. 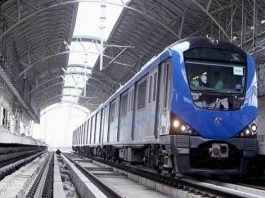 DMRC installs 14 Anti-Smog Guns at its construction sites to combat...