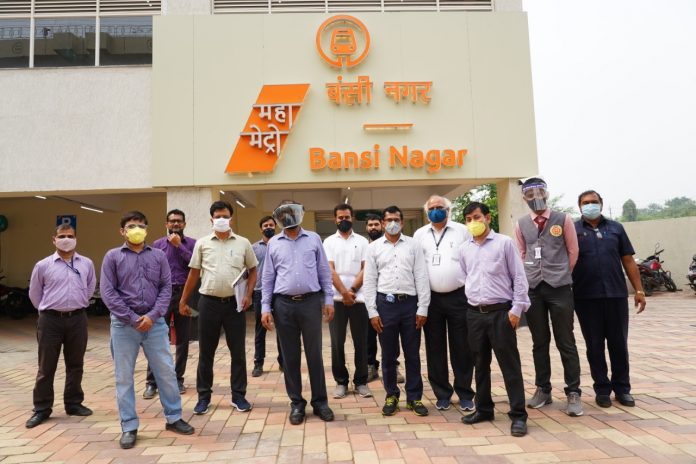 The Metro Stations of Ajni Square and Rahate Colony are part of Reach-I of Nagpur Metro Project, which stretches from Khapri to Sitabuldi Interchange. Similarly, LAD Square and Bansi Nagar are part of Reach-III, which touches Lokmanya Nagar Metro Station and Sitabuldi Interchange on the two extreme sides. Nagpur Project is being executed by Maharashtra Metro Rail Corporation Limited.

The team also reviewed the steps to be taken during emergency situations. A Mock Drill was also organized on the occasion to showcase Maha Metro readiness to deal with any such eventuality. Maha Metro has made special provisions for children and physically challenged like Baby Care Room and specially-made wash rooms at Metro Stations. The team also reviewed these facilities.

The measures taken for passenger safety were examined by CMRS. The officials also inspected Receiving Sub Station (RSS) at Jhansi Rani Metro Station. Maha Metro has constructed a 132 KV sub-station there. The sub-station ensures continuous power supply to East-West Metro Corridor of the Nagpur Metro Project. It is one of the two RSS, constructed by Maha Metro Nagpur.

The two stations of Orange Line are located on Wardha Road – one of the busiest roads of the city. Similarly, the two Aqua Line Metro Stations – LAD Square and Bansi Nagar are located on Ambazari Road and Hingna Road respectively. Once the four stations get operational, it would immensely benefit the people residing in the catchment areas.