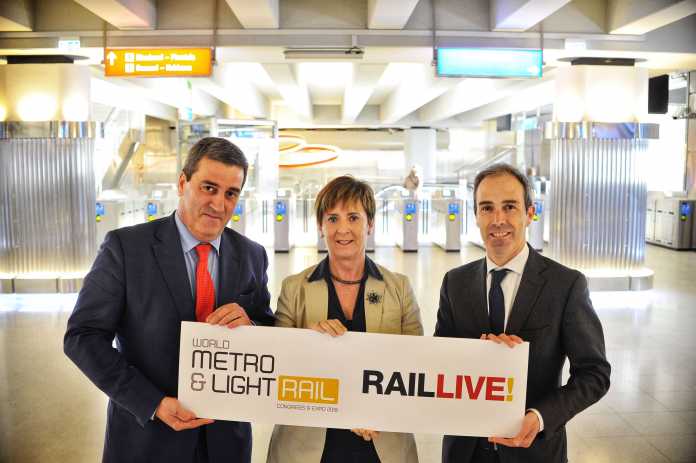 Bilbao, March 2018.- The BEC (Bilbao Exhibition Centre) will host from April 18th to 19th, 2018 one of the most important trade fairs and congresses in the sector for urban, light rail and regional rail networks.

The organisation of Rail Live!, a trade fair within which the “14th World Metro & Light Rail Congress” is framed, a little more than a week prior to its hosting, now enters its final phase. Work is being undertaken on finalising the details of the programme of one of the standout international professional events devoted to underground, light rail and regional rail networks. Representatives from around 100 countries can find out more about the latest technological advances in the sector in the exhibition area. Furthermore, an extensive programme of simultaneous conferences has been prepared in which more than 150 international speakers will give speeches.

For the first time, and after the recent events held in London, hosting will shift to Bilbao. It has the backing of Mafex, the Spanish railway association, in the organisation of the event, as well as that of the Basque Government. The SPRI Group, ETS, Euskotren and Metro Bilbao collaborate in the event’s development. The exhibition also has the support of Adif and Renfe.

In addition, the event will boast the attendance of standout companies in the sector, such as Grupo CAF, ArcelorMittal, Ingeteam, Indra, Siemens, Bombardier and Stadler, amongst others. The participation of 60 companies is forecast, along with start-ups presenting their most recent innovations that will revolutionise the sector of the future, Technology Centres such as IK4 Research Alliance and the presence of Mobility and Logistics Clusters, as well as the Fundigex Foundation.

Under the banner “Innovation. Technology. Performance. “, the event will host for two days a broad debate on the present and future of global public transport. The organisation has put together an intense agenda that will begin on April 17th with prior working sessions between delegates and companies. The discussion forums will focus on key aspects for the future of public transport such as: sustainability strategies, advances in control systems, improvements in mobility and associated services, as well as evolution of the IoT, in the world of transport. For this reason, there will be presentations and case studies of relevant urban rail transport entities such as Transport for London, entity in charge of public transport in the city of London, Metro Los Angeles, Metrolinx of Canada, to name just a few examples.

The official inauguration of the event will be entrusted to the Basque President, Iñigo Urkullu. Afterwards, the event will continue with a special panel formed by four of the highest ranking officials at ETS, Euskotren, Metro Bilbao and Grupo SPRI under the banner: “Strategy in Innovation of Public Transport of the Basque Country”, where Alex Arriola, from Grupo SPRI, Eneko Arruebarrena, from Metro Bilbao, Imanol Leza, from Euskotren and Aitor Garitano from ETS will present the Basque Government’s commitment to innovation in the sector as well as a sustainable and integrated transport model as an instrument of social cohesion and socio-economic development in the Basque Country.

Following this, and for the two days the event lasts, many industry experts will take part in various round tables on the implementation of new technologies in urban transport and how the industry can join this change. In turn, the role of administrations, operators and agents of the sector to match trends with the needs of urban transport will also be analysed.

This edition brings exciting innovations and outstanding advances in the field of R&D in the rail sector from countries such as Iran, Germany, Mexico, Panama, Canada, Poland, Great Britain, Peru, Israel, South Korea, Ireland, France, Russia, amongst others.

The entire schedule of the event, the list of exhibiting companies, as well as the speakers and sponsors are available at the following address:

For more information about the conference: http://www.terrapinn.com/metrobilbao2018

For more information about the exhibition: http://terrapinn.com/raillive-2018

The Spanish Railway Association (Mafex) has as its purpose serving the Spanish railway sector, by assisting its companies in their internationalisation processes and defending the general interests of their associated companies in order to achieve, through cooperation, the highest possible level of competitiveness thereto. Its activities include the coordination of an intense agenda of trade delegations and missions to promote and open markets; the dissemination of information of interest to the partners, as well as the institutional communication with diverse national and international administrations. In order to respond to the new challenges faced by the sector and to support the technological leadership of the industry, Mafex has created a new innovation and competitiveness committee that bolsters its internal organisation.

Mafex, acknowledged as an official collaborating body of the Secretary of State for Trade of the Ministry of Economy and Competitiveness, has the support of the AGEX GROUP to which it belongs and several national and international organisations and institutions such as UNIFE (Association of the European Railway Industry) and ALAMYS (Latin American Association of Subways and Subways)

Terrapinn Holdings Limited has arranged congresses and trade fairs of the highest standard throughout the world since 1988. Their events promote innovation and technology that changes people’s lives, forging alliances with the most important companies and innovators worldwide to make a difference. In the railway sector, it has a considerable portfolio that includes AfricaRail, MENA Rail and AsiaRail. World Metrorail Congress is one of Terrapinn’s flagship congresses and trade fairs, bringing together executive heads and decision-makers from the global rail sector for 13 years.