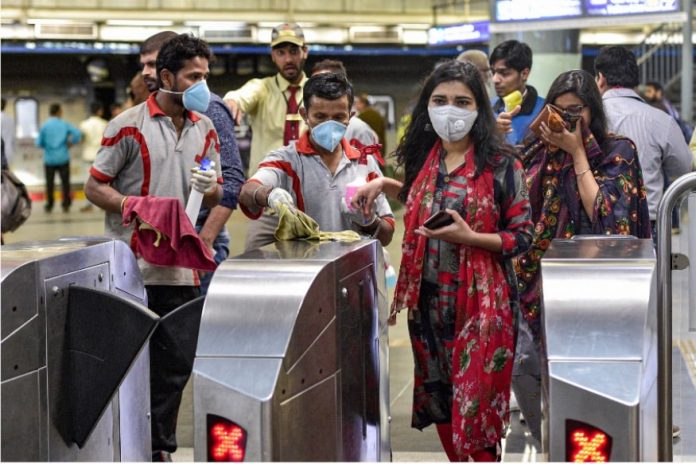 NEW DELHI (Metro Rail News):  Delhi Metro commuters are now intimated that after the resumption of DMRC services, would have to take out any metallic object on their body before frisking, use face masks, have the ‘Aarogya Setu’ app, but those with flu-like symptoms will not be permitted as per a proposal made by the CISF on Thursday.

The paramilitary force that guards the network running over the national capital region (NCR) has formulated a business continuity plan for safety & security of commuters and staff working at the facility.

The intended steps according to the plan accessed by PTI would be executed by the force in consultation with the Delhi Metro and the controlling ministry of Urban Development. The plan has been developed to ensure public confidence in the sense of the rapid rail network to deliver under any condition and to thwart evil designs of disruptive forces to hit the smooth operating of the network.”

According to the plan envisaged through the force that deploys around 12,000 men & women personnel to guard above 160 metro stations the rail network services should be continued in a phased manner.

“Aarogya Setu app with inbuilt e-pass option can be employed for identification of doubted persons having COVID-19 infection. Somebody with high risks for both spreading and contracting infections should be restrained from using the metro,” as per the plan. Every person entering metro premises would be must wearing masks. Hand sanitisation or handwash facility to be available at the entry points.

Along with this the thermal screening of all entrants to be managed at the entry point of stations & those found with abnormal temperatures would not be permitted to enter and persons with cold, cough & other flu-like symptoms would be disallowed entry.

CISF Director General Rajesh Ranjan stated that the news agency that the plan has been made keeping in mind that the speed, safety & security of the commuters, force personnel, DMRC staffers and any other present in the area is secured. The force has also advised that all the commuters would have to take out metallic objects like belts and buckles before frisking and keep them in their bags that would be scanned by an x-ray machine.

A person without bags but taking metallic items would be provided trays as in the case of airport security. Strict distancing norms would be followed during the station area & proper queuing area before the security screening point would be maintained.

DMRC will advise commuters by regular announcements to keep social distancing. Shops or other commercial establishments to ensure social distancing at their locations via means of markings. The CISF has also asked the Delhi Metro to deploy adequate staff at paid sectors with automated fare collection gates & platforms for maintaining COVID-19 protocols.

Commuters would be advised constantly to refrain from touching any surface in the metro stations or trains, the CISF plan stated. It has also suggested that the whole station area be sanitised with chemicals & security fixtures, equipment and x-ray tables should be sanitised frequently.

After the lockdown, our personnel would come in close contact with a large number of passengers daily while performing security duties, mainly during security screening of commuters and baggage and hence they will be more exposed and susceptible to the virus.