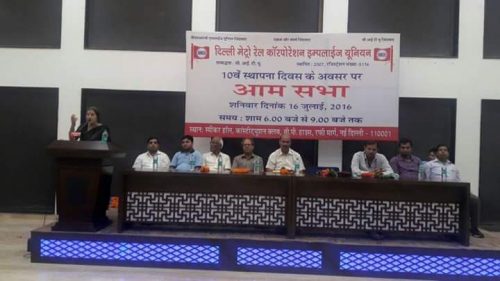 While speaking on the occasion Smt. Karat congratulated and applauded the efforts of DMRCEU and underlined the importance of employees union and employer and labour relations in the society. She suggested DMRC employees to bring out their problems before the general public so that they can know the actual status of employees of an art of state organization, pioneering the smart public transport in Delhi/NCR.

Also speaking on the occasion Comrade Birender Gaud pointed out on the situation of contractual workers in DMRC and urged for paying them full salary with all the benefits as per the Minimum Wages fixed by the Govt. from time to time.

Speaking on the occasion Shri Mahaveer Parsad, General Secretary (DMRCEU) pointed on the recent case of an employee of Mundka depot Shri Sunil Kumar who was maliciously  tortured and harassed by the depot officers and demanded the long pending issues including recognition of union by the DMRC management and urged the management to fulfill the demands.

“The DMRCEU committed to provide full essential support to Shri Sunil Kumar in fighting against the officers for fair justice and condemn the tragedy created by the management with him. Besides this if DMRC fails to implement the decision orders passed in May 2015 on pay-scale issues of non-executives employees then all the DMRC employees will start a protest against the management from 16th August 2016 to 16th September 2016 by showing black ribbon.”, he added.

Speaking on the occasion Shri Manoj Kumar Gupta, Legal Advisor (DMRCEU) pointed out on the increasing corruption in DMRC and dictatorship attitude by the management towards the employees.

The programme was ended with vote of thanks by General Secretary (DMRCEU) followed by dinner party.