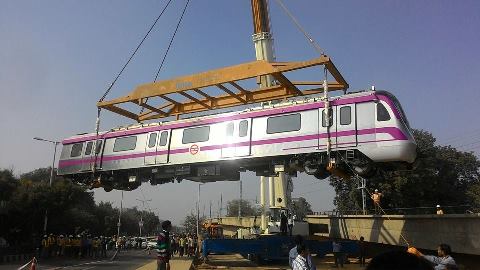 It was done to expedite trial runs on a 13-km-long section between the Janakpuri West, one of its ends, and IGI Airport (domestic terminal) stations. The other end of the line is at Botanical Garden in Noida.

Delhi Metro Rail Corporation (DMRC) plans to launch the corridor (Line 7) in parts next year because trial runs across the line cannot be undertaken as work is still on along certain stretches, hindering access to the depot at Kalindi Kunj, an official said.

Moreover, Phase III will see the implementation of the Communication Based Train Control (CBTC) technology for the first time.

The commissioning time for signalling is likely to take longer and hence, it was decided to take up commissioning work in multiple sections side by side, a DMRC spokesperson said.

“Through a carefully planned operation, the coaches were lowered near the ramp (the location where the alignment goes underground from elevated) and positioned on the tracks with the help of special high capacity cranes and trailers,” the spokesperson said.

The remaining four coaches of the train will be positioned on the tracks in the next few days after which the process of starting trials will begin, the official said.

“In a similar operation, a four coach train was lowered on a ramp near Lajpat Nagar in 2010 to begin the trial runs on the Central Secretariat – Badarpur Violet corridor. However, this particular operation is more challenging as six coaches are being placed this time instead of four,” DMRC said in a statement.