New Delhi: After 14 years of ferrying the capital’s masses, Delhi Metro is feeling its age. And with passengers having risen from a mere lakh in 2002 to over 27 lakh now, and with two new corridors to open next year, the urban train system is straining to maintain the standards with which it began operations. 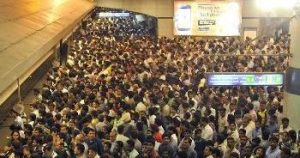 he wear and tear of 14 years is quite visible: trains break down more often now, the overhead electrification system regularly gets disrupted and even outages halt the services. Outside the stations, autorickshaws, e-rickshaws, buses and cars vie for space, crowding out the commuters. Inside the stations, it’s no better. The passenger count at major stations such as Rajiv Chowk, Chandni Chowk, New Delhi, HUDA City Centre and GTB Nagar is between 50,000 and 80,000 every day . Not surprisingly, Delhi Metro has had to induct more marshals or `customer facilitation agents’ -400 at around 20 busy stations -in the past year.

But the Delhi Metro Rail Corporation (DMRC) is not sitting idly watching this chaos unfold. It does have plans to streamline the system. For one, the company is reconfiguring the stations. Says Sharat Sharma, director (operations): “Nine stations on Line 2 and Line 3 are being been remodelled for better passenger convenience. This includes shifting and relocation of stairs, ticket counters and exitentry gates to ease congestion.” The nine stations are HUDA City Centre, Rajiv Chowk, New Delhi, Kirti Nagar, Guru Dronacharya, MG Road and Noida Sector 15, Noida Sector 16 and Noida City Centre.

At Rajiv Chowk, for instance, the Viewers’ Gallery, shut all these years to commuters, has been made accessible to them to enable easy passage to either platforms there. “We saw that almost 35,000 passengers entered the station from Gates 5 to 8 and crossed the bridge to get to the other platform. The opening up of the Viewers’ Gallery allows better distribution of passenger flow,” explains Sharma.

At HUDA City Centre, Chandni Chowk and New Delhi, the ticket counters and automated fare collection gates were increased or relocated to create space for passengers.The points where CISF frisked commuters were similarly shifted.  The operations director says that to ensure hassle-free passenger services, 171 new token vending machines were put up at major stations, while around 180 new fare collection gates have been erected at busy stations for the convenience of passengers making an entry or an exit.

The overcrowding can often result in accidents. In 2014-15, 71 passengers jumped on to or fell on the tracks. And while this figure slid to 35 in 2015-16, passenger safety remains a big concern. To address this, DMRC plans to install platform screen doors at Central Secretariat, Rajiv Chowk, New Delhi, Chawri Bazar, Chandni Chowk and Kashmere Gate. The restraining screens will not only prevent accidental falls and deter suicide attempts, but also enable better crowd management. “The doors will enable optimum utilisation of the platform space,” assures a DMRC official.

GMRC to change construction plans of Surat Metro, no. of affected...