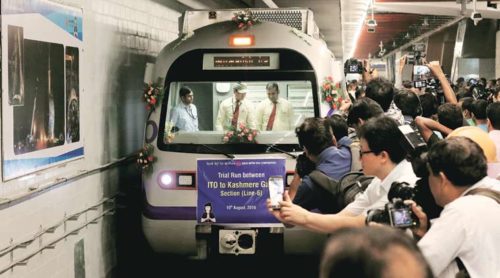 This entirely underground section will comprise of four stations – Delhi Gate, Jama Masjid, Lal Quila and Kashmere Gate. The Kashmere Gate station will become the first ever interchange facility of the Delhi Metro system to provide interconnectivity between three corridors of the network (violet line with red and yellow lines).

During the trial runs, the interaction of the Metro train with physical infringements (civil structure) will be checked to ensure that there is no physical blockage during the movement of the train on the track. The entire signaling system will also undergo rigorous testing.

In addition, the response of the train at different speeds, braking of the train and the interconnection with the Operations Control Centre (OCC) will also be monitored during the trials. The behavior of the track system and the Over Head Electrification (OHE) will be checked repeatedly during all the trials.

This section, also called the heritage line passes through various historical landmarks of the Old Delhi such as Delhi Gate, Jama Masjid and Red Fort. After the commissioning of this section, residents of Faridabad and various south Delhi areas such as Govindpuri, Kalkaji, Nehru Place, East of Kailash etc will be able to travel directly to Old Delhi and vice versa.

Commuters travelling on the yellow line between Central Secretariat and Kashmere Gate will also have another alternative of using the violet line for reaching the same destinations which, in turn, will decongest the system.

Since the corridor passes through areas of great historical importance, the stations have been decorated with panels and artworks depicting the glory of the bygone era. DMRC had tied up with the art and culture body INTACH for artworks at the stations. During construction also, adequate care was taken to ensure that the monuments nearby were not harmed in any way by Metro construction. The Heritage Line was given clearance by NMA (National Monuments Authority) on 13th February 2013.