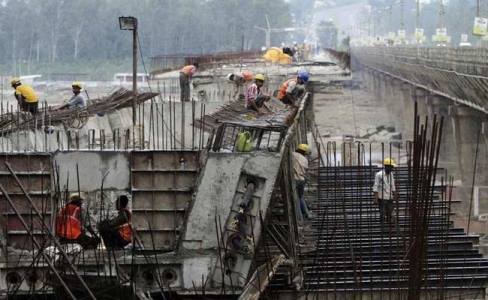 New Delhi: The Delhi Metro Rail Corporation (DMRC) has decided to suspend large part of its construction work for five days keeping in the view the alarmingly high level of air pollution in the Capital.

DMRC spokesperson Anuj Dayal said that the corporation has stopped carrying out excavation and backfilling (refilling a hole) work, dry dismantling of concrete and brick, and dry stone cutting, which is likely to cause dust pollution.

He said that all diesel generator sets will be stopped, except those required for safety and security and additional water sprinkling is being carried out at all construction sites.

‘‘Any other activity causing dust will be suspended for five days,” Mr. Dayal said.

“These steps have been taken in compliance of the instructions given by the Delhi government regarding construction sites,” Mr. Dayal said.

“As part of its work culture, the DMRC accords very high priority to the issue of preservation of the environment.”

The muck and soil generated from excavation at construction sites is being disposed off at designated areas using dumpers with tarpaulin cover on top, the spokesman said. The DMRC is also ensuring that wheels of trucks exiting construction sites are thoroughly washed before they enter public roads.

“Vehicles at the sites are restricted to a maximum speed of 10-15 kmph. This results in less dust emission and improved safety,” Mr. Dayal said.

The spokesman said that all DMRC construction is carried out in accordance with its environmental policy.