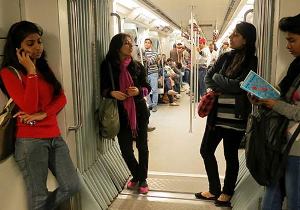 New Delhi: Delhi Metro’s 140 kilometre long Phase-3 project, the largest in India so far, is going to be completed by the third quarter of 2017. Once fully operational, the new corridors will reduce travel time by up to 30 minutes.

Built at a cost of over Rs 40,000 crore, the Phase-3 network will add 15 interchange stations to the existing nine and will take the count of total Metro stations in Delhi-NCR to 227 — a first for an Indian city. Two brand new corridors the 58.59km long Pink Line (Majlis Park-Shiv Vihar) and the 38.23km long Magenta Line (Janakpuri West-Botanical Garden), and an extension of the Violet Line, called Heritage Line (ITO-Kashmere Gate), are going to push Delhi Metro’s daily ridership to more than four million.

A study by Central Road Research Institute (CRRI) stated that the Metro helped keep around four lakh cars off roads in 2014. Once the city’s upgraded Metro matrix is thrown open to public, the number is going to increase exponentially reducing pollution and most importantly, traffic congestions.

Choosing the Metro over a car while travelling from Gurgaon to Noida will help commuters save 30 minutes. Same amount of time will be saved in travelling from Janakpuri to Faridabad, and over 15 minutes for going to Lajpat Nagar from Dwarka.

“If we look at the Gurgaon-Noida road travel time, it takes around 90 minutes. With the new Hauz Khaz interchange station, the travel time will be flat 50 minutes. Passengers from Gurgaon will be able to get down at Hauz Khas and take a direct train to Kalkaji via the Magenta Line instead of taking the Violet Line from Central Secretariat,” said Anuj Dayal, executive director (Corporate Communications), Delhi Metro Rail Corporation (DMRC).

The unique feature of the project is that walking from one point on the station to another is going to be quicker and easier. For example, Rajouri Garden station on the Pink Line will be connected with the existing station of the Blue Line (Dwarka Sector 21-Noida City Centre/Vaishali) through a foot overbridge (FoB) which will have 10 travelators covering a distance of 310 metre.

Commuters will travel in technologically advanced and energy-efficient trains on the new sections where DMRC is also putting in place a new signalling system known as Communication Based Train Control (CBTC).The trains equipped with Unattended Train Operation (UTO) feature will run driverless after about two years of their operation and will also have wi-fi facility.

The new stations will get a different look and will have more of the automated token and card recharge machinery. Platforms will get screen doors for better crowd management and stations will have better visual appeal with artworks.