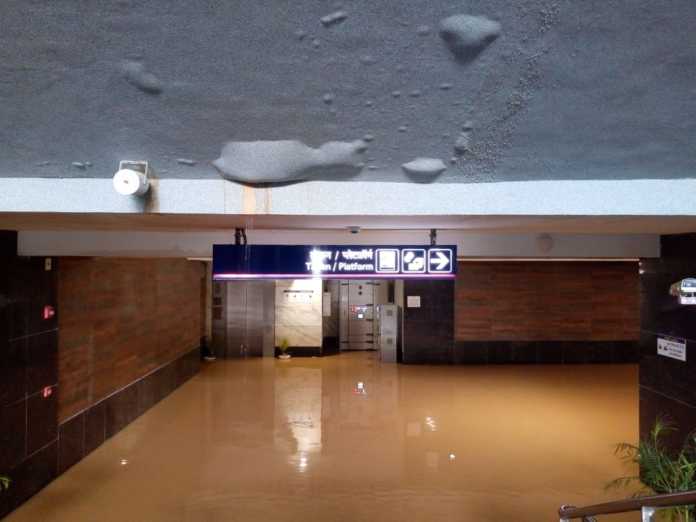 New Delhi: One more incident occurs in Delhi Metro Rail Corporation station. Due to heavy rain newly built platform gets damaged and water logged in concourse area of metro station at Bhikaji Cama Place on Pink Line (Line 7).This is very bad news for Delhi Metro Commuters that the line which was likely to start in August gets damaged. This damages clearly shows poor construction and low quality material used in while constructing.

It is very shocked that even after the inspection of Pink line, damages occur in it. If there was such loopholes then how it gets safety approval from Commissioner of Metro Railway Safety (CMRS)….?? Delhi Metro Rail Corporation (DMRC) needs to look at the issues. Continuously Delhi Metro is losing its name because of improper services. Few days before there are number of incident occur:

And recently we have seen in the most newspaper that DMRC  don’t  have work to do due to which 600 Engineers are seating free. The whole dramatic news of Delhi Metro is not at all understandable to us. People really want to know the actual scenario of Delhi Metro. Delhi Metro is covering larger scale of network among India. It’s about safety of 32 lakh people who are travelling in Delhi Metro, there life may get affected if such incidence continues.

It is very important for the Delhi Metro Rail Corporation (DMRC) to take urgent and corrective action against the such damages occurring in Delhi Metro sites.