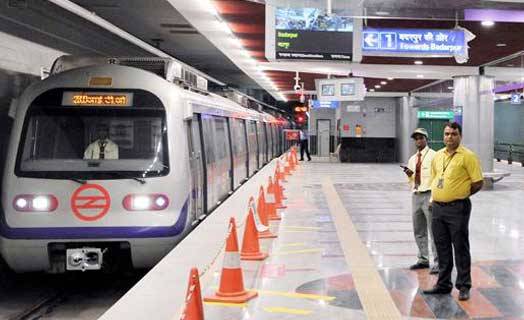 New Delhi: Commuters on Delhi Metro’s Violet Line had a hard time on Saturday evening, when the automatic doors of a train could not be closed. This delayed the services for at least half an hour at the Central Secretariat metro station.

The technical glitch occurred during the evening peak hours between 6.30 pm and 7 pm. The Violet Line which connects Delhi’s Kashmere Gate to the satellite town of Escorts Mujesar, Faridabad is one of the busiest at an interchange station.
buy Glucophage generic bloinfobuy.com over the counter

A large crowd swelled on the platform while the train was stuck because of the glitch. This put all the other trains on the line on hold.

“I was to board the train from Central Secretariat to go to Moolchand. One of the gates of the train did not close,” said Aysuhi Mittal, a marketing professional who is a regular Metro commuter.

While the Metro’s technical staff tried to fix the glitch, operations remained shut for around 20 minutes.

“After several unsuccessful attempts to rectify the fault, the officials decided to shut the doors manually. However their efforts did not yield results,” said Raghav Joshi, a student, who was in the train.

Meanwhile, Delhi Metro Rail Corporation (DMRC) officials, said, “A technical glitch had occurred due to which the doors could not be closed. Operations were not affected. However, in view of passenger safety, the train doors were manned by Metro staff till Badarpur after which the train was sent to the depot.”