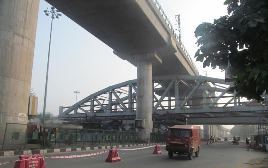 New Delhi: The Delhi Metro engineers prefabricated a steel bridge which they have successfully placed below the existing elevated metro line at Rajouri Garden in a six day long operation providing a vital link to the 59 Km long Majlis Park-Shiv Vihar metro corridor of Phase III of the Delhi Metro Project.

This steel span was constructed to achieve the mandatory ground clearance of 5.50 meters which otherwise was not available with the conventional technique of building a box girder viaduct, as the Line 7 viaduct was going under the existing Line 3( Dwarka Sector 21-Noida/Vaishali).The height of blue line’s (Dwarka-Noida/Vaishali) viaduct is 16.6 meters from the road and line 7 viaduct is at 5.73 meters.

The various components and parts of the steel span were taken to the construction site and assembled in a systematic way. The span was then “pushed” starting from pillar P157 towards pillars P 156 at Rajouri Garden intersection. The steel span was pushed about 60 meters to reach the final location. The pushing work was started on 11th August, 2015 and was completed by 17th August.

About 12 ‘HILLMAN’ rollers of capacity 200 MT each and 2 nos. hydraulic jacks of capacity of 50MT were engaged to complete the launching operation.

The launching of the steel span was carried out in the night hours so as to avoid inconvenience to the road traffic during the day time. Adequate traffic marshals were deployed to regulate the traffic.

Usually, Delhi Metro uses spans of 31 metres for construction of viaduct, but due to the presence of heavy traffic on the ring road, this mammoth steel span which is much longer in length (almost double) has been used to connect the upcoming Rajouri Garden station with the viaduct joining the line further to the upcoming Mayapuri station.