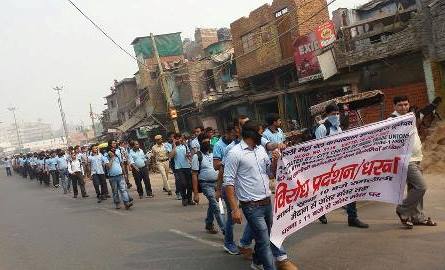 New Delhi: The Delhi Metro Rail Corporation has hit rough waters with its employees resorting to protests once again. The protesting non-executive employees of the corporation have now begun a hunger strike as they claim their demands for salary restructuring are going unheard by the administration.

As many as 3,600 employees, mainly technicians, are taking turns to protest at Jantar Mantar and at the seven metro depots. They are not ruling out train services being affected as 32 of those on hunger strike have already been hospitalized. Members of the staff council are likely to meet the administration on Monday to reach a common consensus.

According to General Secretary, DMRC Employees Union, Kuldeep Maan, the employees fear that once the Seventh Pay Commission is implemented, their problems with the corporation would be quashed. “We have been victims of DMRC’s exploitation since 2007. Our protest has been on for long now but nothing has happened. On November 3, we decided to extend the protest to Jantar Mantar and November 5 onwards employees began their hunger strike,” he said.

To register his protest for the cause Kishan went a step ahead and resigned from his membership of the employees’ council. “So far, 40 of the many employees on hunger strike have been hospitalised. If the administration does now blink an eye many more will be taken ill and then we won’t be responsible if metro operations are hit,” said another protesting member. The administration had called for a meeting once, but it bore no fruitful conclusions, he added.

Responding to the report, the DMRC said, “It is an internal matter of the organization and the Human Resource department has taken up the issues of these employees.”

Further, the metro staffs on hunger strike said media that they will stop metro rail operation in the Delhi at any time if their demands does not met.