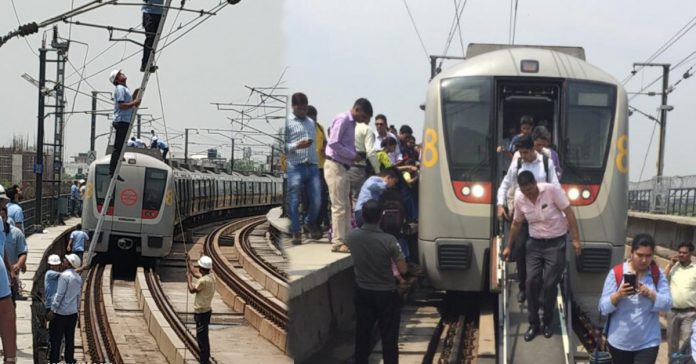 According to the officials, The train services were hit around 9.32 am due to a breakdown of the overhead wire (OHE) at Sultanpur station, leading to tripping of power supply in the section.

Normal services have now resumed. Inconvenience is regretted. Please allow for some extra time in your commute till the bunching of trains eases. https://t.co/Nnqw2VvmIE

Two maintenance teams of DMRC technicians, comprising 16 officials, worked to rectify the problem and trains were initially run at a restricted speed between Chhattarpur and Qutub Minar stations.

Nearly three-and-a-half hours later, end-to-end services were partially restored, with trains plying between Qutub Minar and Sultanpur stations with a lower frequency and in another 30 minutes, normal services resumed.

Delhi Metro constantly updated the status of the disruption and rectification on its social media platforms to inform commuters.

Two maintenance teams of DMRC technicians consisting of 16 officials worked urgently to rectify the problem. Temporary restoration has been completed and trains are expected to run at restricted speed between Chhattarpur and Qutub Minar soon. pic.twitter.com/0N9WMpiAU9

“Normal services have now resumed. Inconvenience is regretted. Please allow for some extra time in your commute till the bunching of trains eases,” the DMRC said in a tweet.

The 48.8 km-long Yellow Line has 37 stations and has an average daily ridership of about 7 to 8 lakh.

With inputs from PTI

ABOUT US
Metro Rail News, is India's exclusive and leading news portal and monthly magazine which is being published with a deep focus on urban mobility, metro railway projects, mass rapid transit systems, high-speed rail projects, transport infrastructure, and smart public transportation in smart cities projects in India by Symbroj Media Pvt. Ltd., New Delhi. Our magazine has presently 10000+ print subscribers and 75000+ digital subscribers from relevant industries and growing rapidly. You will be glad to know that most of our subscribers belong from the decision maker community of the industry.
Contact us: [email protected]in
FOLLOW US
© 2015-20 Metro Rail News | Symbroj Media Pvt Ltd | All Right Reserved.
This website uses cookies to improve your experience. We'll assume you're ok with this, but you can opt-out if you wish.Accept Read More
Privacy & Cookies Policy