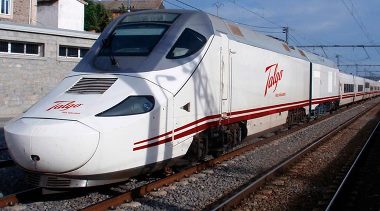 New Delhi: Passengers will now be able to cover the 1200-kilometers Delhi-Mumbai journey in just 12 hours as compared to over 17 hours at present with the high speed Talgo train.

Dispatched in a cargo ship from Barcelona on March 27, they will be put on trial on the existing tracks for validation test.

“Talgo coaches have arrived at the Mumbai port. These coaches will be transported to Izzatnagar Depot after getting customs clearances,” a senior Railway Ministry official said.

The Spanish train-maker has offered to test run its lighter and faster trains free of cost on the existing Indian Railways network.

The third one will be carried out between Delhi and Mumbai at a maximum speed of 200 kmph.

According to Railways, Talgo trains are capable of running at speeds varying between 160-200 kmph on the existing infrastructure without any upgrade.

Barring minor changes, there will be no need for overhauling the tracks for the trial run, the official said, adding, the cost of import of coaches and customs clearances will be borne by Talgo.

Besides reducing travel time, Talgo’s lighter trains consume 30 per cent less energy which will help railways reduce the power bill as well. (With inputs from PTI).