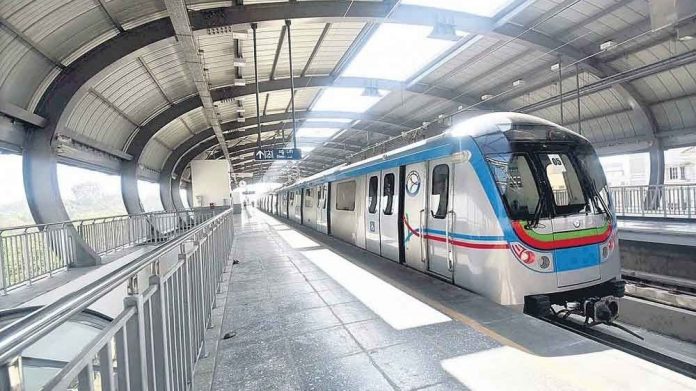 HYDERABAD (Metro Rail News): The Hyderabad Metro Rail project still lacks an efficient first and last-mile connectivity and a common ticket for different commutes even as it sees a steady rise in passengers with the number inching towards three-lakh mark every day.

Once the Raidurg station on Corridor 3 gets operational, trains with better frequency would ensure more passengers to hop in and ease crowd pressure during peak hours, but a lot more effort is needed to make the first and last-mile connectivity towards metro stations reliable and affordable.

Shuttle services are being run by some firms at Hi-Tec City and Durgam Cheruvu stations, while the L&T Metro Rail is running them from stations like Secunderabad East, Tarnaka, Mettuguda, and others. Yet, these are either insufficient or the frequency of 15-30 minutes is not working out if passengers reactions are anything to go by.

Kusuma, an IT professional who was traveling from Begumpet said that I have shifted back to MMTS, which is less-crowded and also convenient to get transport from the railway station to my office at Kondapur. Metro ride was comfortable, but after alighting at Hi-Tec City, it is a nightmare to get into shuttle bus or shared auto-rickshaws packed to capacity.

The most heard comment was Unless you share the auto, the fare is flat ₹50 or ₹100 at metro stations to travel to nearby offices or residences. Kalpana, a banking professional, thinks it is more convenient to take a shared cab from Mahendra Hills to Jubilee Hills Check Post than travel in metro.

She said that commute by auto or cab to Parade Grounds station from home and again to the office from Jubilee Hills Check Post metro station is more than double the metro ticket fare. It is more convenient to take a shared cab with my colleagues. Or take the case of Murthy, a private sector employee, commuting to Begumpet from Bandlaguda.

Those sharing a cab shell out about ₹50-₹80 per head to catch the metro rail moving towards Ameerpet and from onward to Hi-Tec City. Mr. Murthy said that we have an RTC depot in the vicinity, but after a couple of months of shuttle services, they were withdrawn.

Prashant M. who was travelling from Hi-Tech City to DLF tweeted that time travelled in the metro is being wasted waiting for half-hour shuttle service every day. And, the promise of a common ticket for use through metro, auto, cabs, bus, and train could have prevented unfettered fare rip-offs, but it is not in sight.