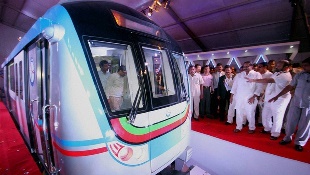 Hyderabad: L&T Metro Rail Hyderabad (L&TMRH) has announced the first test run on the complete stretch of Miyapur to S.R. Nagar, stage two, as per the construction schedule for the concessionaire which is building the project, and will also be running it.

The test run was conducted on the overhead viaduct on corridor one (Red Line) Miyapur to S.R. Nagar on the auspicious Dasara day (Oct.22). This is an important step towards making the 10-km. section, including the Bharatnagar rail over bridge ready for commercial operations, said chief executive and managing director V.B. Gadgil on Monday.

Earlier, L&TMRH had conducted test runs between Miyapur and Kukatpally for a distance of 4.4-km in May. There are more than 10 coach trains sourced from Hyundai Rotem (South Korea) in the Miyapur depot, a 100 acre site and second largest depot for the Hyderabad Metro Rail project.

It is next only to Uppal depot which is of equal size where the main controlling centre of the project is nearing completion. There are about 18 three coach trains stationed there and trail as well as test runs have been completed on the first stage of the construction project – Nagole to Mettuguda, an eight kilometre stretch. It comes under Corridor Three – Nagole to Raidurg or the Blue Line. Second Corridor is between Jubilee Bus Station to Falaknuma or the Green Line.