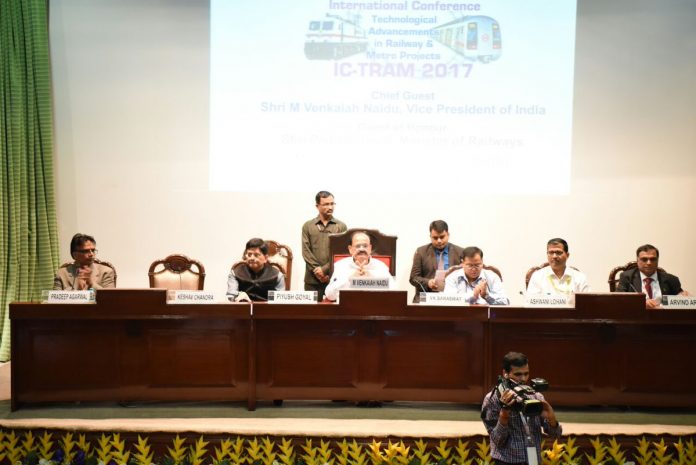 New Delhi: Hon’ble Vice President of India, Shri Shri M. Venkaiah Naidu inaugurated an International Conference on Technological Advancements in Railway and Metro Projects (IC-TRAM 2017) and an Exhibition  on October 6 – 7, 2017 at New Delhi. The conference  Minister of Railways & Coal, Shri Piyush Goyal also addressed the conference. The Conference has been organized by the Defence Infrastructure Planning & Management Council(DIPM), the Ministry of Railways, the Ministry of Urban Development and the Niti Aayog. The Chairman, Railway Board, Shri Ashwani Lohani, Member, Niti Aayog and  Chief Patron of DIPM Society,  Dr. V. K. Saraswat,  and other dignitaries were present on the occasion.

Addressing the conference, the Vice President of India, Shri M. Venkaiah Naidu has said that the Technology along with managerial excellence can chart a new trajectory. 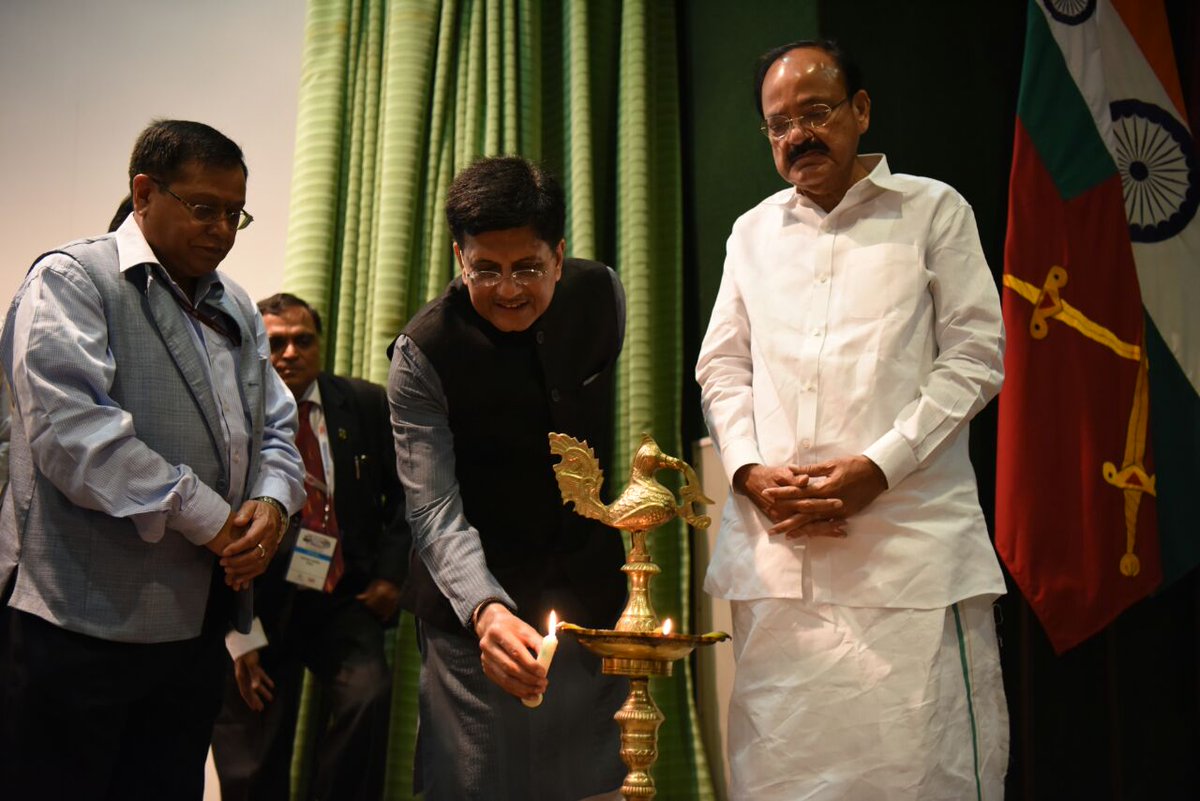 The Vice President said that with urbanization taking place at a rapid pace in India, the need for efficient and cost-effective transport is critical in ensuring faster mobility and sustainable development. He further said that new concepts such as ‘Transit Oriented Development’ should be tried out and promoted which will improve the lives of people living around the metro stations in a big way.

The Vice President said that the Indian Railways need to plan for a massive expansion very meticulously with forward looking, efficient technologies and innovative practices currently available across the globe and adopt them to serve our country’s aspiring population. He further said that the IT revolution sweeping the world, to which India has also been a major contributor, is bound to improve the efficiency in signaling, communications and safety and help in areas like intelligent transportation systems.

The Vice President said that in the Indian ethos, we believe that science and technology are tools to improve the quality of life and we say “Bahujana hitaya, bahujana sukhaya” implying that we aim at the good of humanity at large and also care for the happiness of the entire population on this planet. We also believe this is possible if we are open to new ideas and concepts, either home grown or from outside, he added.

The Vice President expressed his hope that the discussions and the deliberations in this two-day conference will provide a fast-track approach to build many state of the art railway systems that will improve the economy and the quality of life of people in India and the rest of the world. 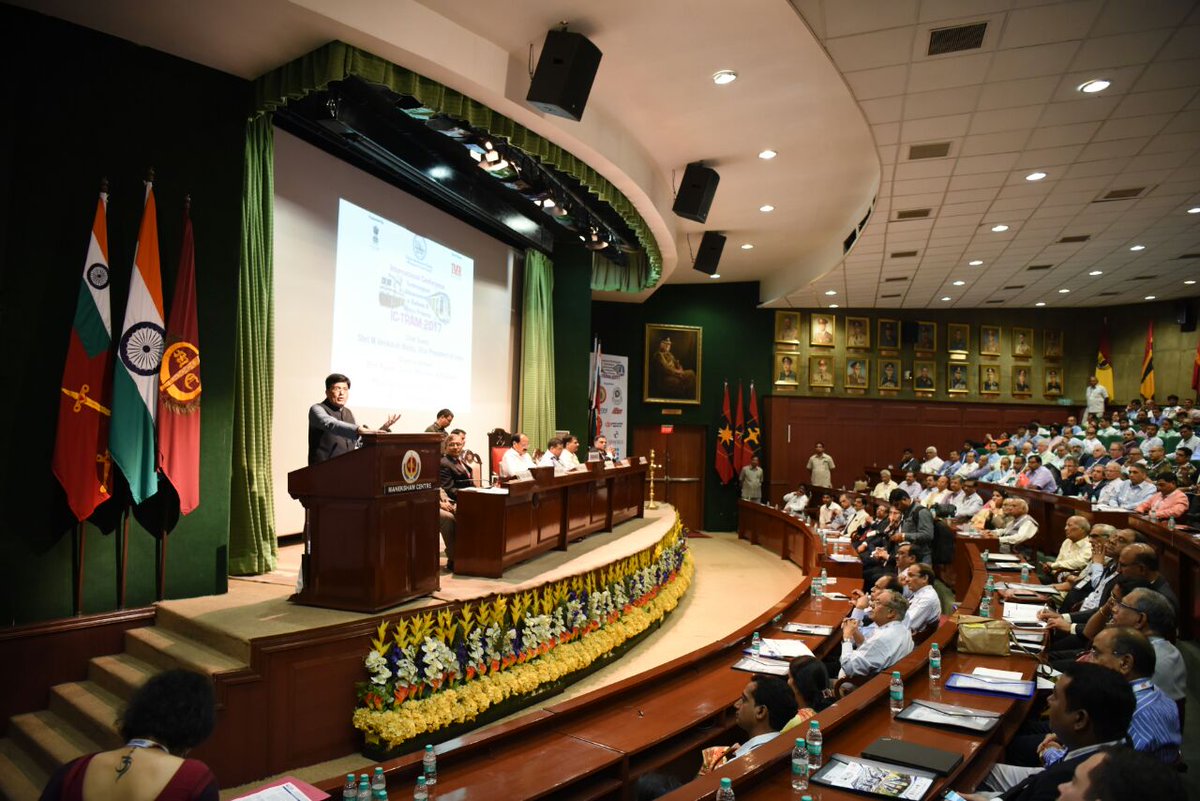 Speaking on the occasion, Minister of Railways & Coal, Shri Piyush Goyal said, “The need for transportation in urban areas has increased many fold and Metro Railway has a big role in meeting transportation needs. Referring to the significance of innovation and research. He said that R&D is the driver for growth and it forms the eco-system, which encourages scientists to persevere for better yields. He said that we have to go beyond the boundaries of conventional thinking to achieve excellence. He said that India has already taken greater strides in the fields of climate change, renewable energy and activities like rolling out of LED programs. He said that time has come to lead the world and also called upon to make India as the nerve centre of innovations and technological advancements. He emphasized that fund should never be constraint for undertaking innovation and technological advancements.

He said that in the context of Railways, we have to work towards procuring technology for night-fog vision, better signaling system, better track-laying technologies. We need to collectively work and Railways Institution like RDSO can collaborate with other research organizations like DRDO, ISRO to achieve desired objectives. We need to fast track our efforts and constantly endeavor to work better in every aspect. We must work to see, whether we can design better coaches, better locomotives, better signaling system and other related activity. We must explore cooperation with military engineering service personnel, who are passionately working in the service of the nation. We have to work through cooperation, oneness in public service for the future of the country. We need to lead from front. Indian Railways need to work with the commitment to make Indian Railways safe, secure and with better amenities, riding efforts, punctuality and efficiency.”

Referring to the contribution of Vice-President in public life, who was the Chief-Guest of the program, Shri Piyush Goyal said that Shri Venkaiah Naidu ji has been relentlessly working for the last 40 years for the welfare of the people, especially for farmers and common-man.

Chairman, Railway Board, Shri Ashwani Lohani said that with mobility requirements increasing several fold due to massive urbanization, the need for building Metros in our congested cities and strengthening the Railway infrastructure, has become imperative and assumed critical proportions. He said that the conference will bring up new technological ideas and innovations in the fore and help Indian Railways embrace some of those ideas for moving forward in the present era.

Member, Niti Aayog and  Chief Patron of DIPM Society,  Dr. V. K. Saraswat, said that this conference is having the best speakers who are not only experts in their chosen subject but also have a deep understanding of railway and metro technologies, implementation and solutions to problems from personal experience.

Chairman, Organizing Committee of the Conference (IC-TRAM 2017) and former Member, Railway Board Shri Keshav Chandra outlined the objectives of the conference. He elaborated the focus areas being dealt in different session of the conference. He pointed out that this conference is a fine opportunity for all those in the business of railways and metro transportation, as well as the larger transportation community, operators, engineers, architects, planners, administrators, scholars and so on to upgrade their technical skills and knowledge, interact with specialists from various engineering disciplines, hear from the experts in India and abroad on the fine ‘art and science’ of metro building and railway modernization. Experts will share secrets of effecting efficiencies through enhanced equipment reliability, World-renowned Safety Experts will expound on the essential fundamentals of accident free performance.

Metro Rail News was the official media partner of the this giant conference. Some of the important topics on Railways and Metro Rail Systems, which were covered in the two-day Seminar, are as follows: