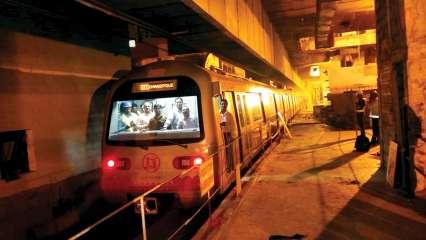 JAIPUR (Metro Rail News): Jaipur metro is going to make a change in how passengers traverse in Jaipur and now residents may be a step closer to a functional metro. The Pink City is on a quick way to development with the upcoming metro project.

From senior officials, the underground metro routes would shortly go through inspections, that is a step towards making Jaipur Metro Phase IB a reality very shortly. Construction work for these underground routes has been finished and once the reviews are carried out, Jaipur metro would become operational for the people. As an inspection part, all aspects of Jaipur metro including stations, track parameters, tunnel safety, train systems and any other safety regards would be scrutinized.

These inspections are important when it comes to finalizing the metro as this assures safe and seamless travels with the metro. One thing remaining in the underground metro is the installation of signalling points. The technology will help manage train tracks along with routes themselves. Signalling is vital in keeping metro trains punctual also. Once the technology is performed the JMRC would invite the Commissioner of Metro Rail Safety to solidify the entire project.

Reports advised that the JMRC was opting for elevated tracks that will help cut down costs, earlier this month. Via this is the case for the metro Phase II, Phase IB would use the recently constructed underground tunnels. To clarify Phase IA of the metro joins Chandpole-Mansarovar that is a functional route already.

Phase IA & IB: The underground metro is a direct extension of the present Chandpole-Mansarovar route of Phase IA. Authorities have said that the main goal is to have Phase IB the extension of Phase IA ready and operational by the end of March 2020.

The current Phase IA covers 9.63-km of the total distance. Once the extension is finished the entire length of the route would be increased to a total of 11.97-km. The Phase IB would have a length of 2.34-km and would have 2 stations along with the route. The start of Metro Phase IB in Jaipur metro will provide rise to a better-connected city that is an important step towards city’s progress.