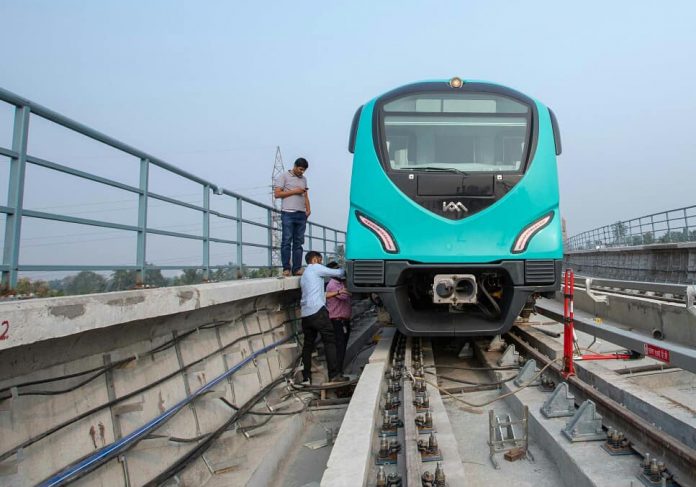 KOCHI (Metro Rail News): Kochi Metro Rail Ltd will stretch its service from Thaikkudam-Pettah. The trial run of the new facility conducted on Saturday. The KMRL authority informed that the inauguration of Pettah route is going to held on March last or April first week.

The trial run began from Thaikkudam at 7.40 am in the morning on Saturday. The officials examined the tracks and the functioning of the third rail, which generates power. At 8.20 am, the train departed from Pettah and reached Thaikkudam at 9.00 am.

Kochi Metro informed that inspections, including signalling and trial run, would continue in the coming days as well. The train took service at a speed of 5 km per hour on Saturday, and In the upcoming days, speed will be increased to 30 km/hr and 50 km/hr as part of the inspection. A load test will be carried out to monitor the capacity of the tracks.

Representatives of Delhi Metro Rail Corporation (DMRC) who carried out the construction also took part in the inspection.

Though the works related to bridge and signalling were completed, works in the metro stations including laying tiles are pending.

Kochi Metro launched its first service from Aluva to Palarivattom on June 17, 2017. Later, the service was extended to Maharaja’s and Thaikkudam.

KMRL is planning to extend the service to SN Junction and Thripunithura railway station in the second phase.