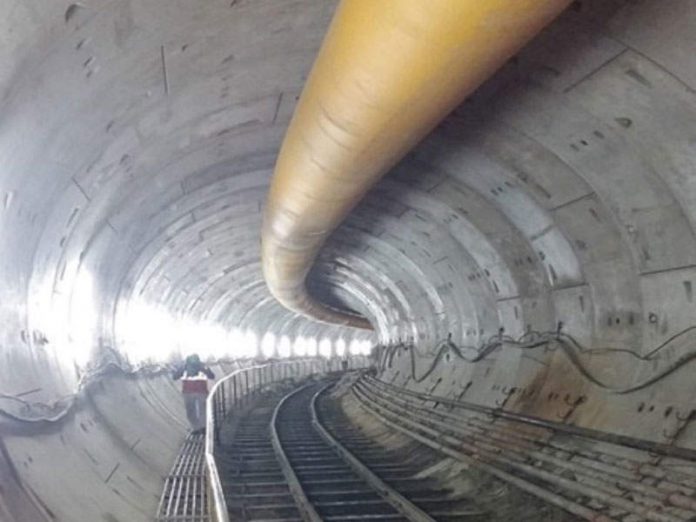 Also, the safety of the people residing in dilapidated buildings – many of that was built over 120 yrs ago, in one part of the route is a cause for concern, Leonard John Endicott said a geotechnical expert and committee head.

“The biggest challenge is that many buildings in the area are in poor condition. Our concern is the safety of the people,” he added further.

“The corridor tunnelling work was postponed after one of the two tunnel boring machines hit an aquifer on August 31, 2019, in Bowbazar area leading to severe ground subsidence and the collapse of buildings, will resume in full swing in a day or two,” said Endicott.

With the TBM getting destroyed beyond repair in the accident, the work will have to be finished with one tunnel boring machines only. The existing TBM has been moved a few rigs to check for all safety parameters put in place to assure that there is no repeat of the earlier incident. “We are supercautious,” Endicott said.

Earlier to that accident at Bowbazar, two TBMs were working parallelly, boring tunnels for the up and down lines of the East-West Metro corridor. “It will take around five months for the TBM to go up to Sealdah from Bowbazar. Then, it will take three months for the TBM, which is a huge machine, to turn around.

“It will take another two months for the machine to dig on another side and reach up to the point where the first TBM had cut the tunnel,” the geotechnical expert stated. He told that the working TBM had been upgraded and it now has 50% more capacity to assure that the ground holds throughout tunnelling work.

“Special measures have been taken to ensure that water does not seep into the tunnel,” he said that the adding that work will be stopped within 60 minutes of noticing any abnormality throughout tunnelling in the area.

The damaged TBM, which Endicott said is a “write-off”, will be dismantled and carried away from the underground shaft. The Calcutta High Court had allowed restart of tunnel-boring work for the East-West Metro corridor, on February 11.

According to a report by IIT-Madras, the court’s division bench directed the Kolkata Metro Rail Co., the executing agency for the project, to resume operations in Bowbazar, in consultation with the institute. The bench including Chief Justice TBN Radhakrishnan and Justice Arijit Banerjee had ordered a suspension of tunnelling work till further orders, in September last yr.

After three months, the KMRC because of a report made by the expert committee moved the court seeking its permission to restart the works. On a prayer by an NGO to get the expert committee report vetted by an independent agency, the KMRC requested IIT-Madras to analyse its findings. The institute, in its report mentioned that tunnel-boring work could be resumed.

The 4.88 km first phase of the East-West Metro, linking Sector V in Salt Lake with Yuva Bharati Krirangan Stadium begin operational on February 13. Inaugurating the operation, Railway Minister Piyush Goyal had said the whole 16.5 km stretch of the corridor – from Sector V to Howrah Maidan – is likely to be ready in 2 yrs. The Kolkata East-West Metro corridor was earlier scheduled to be finished by June 2021.

Delhi Metro to start service from 4 a.m on poll day