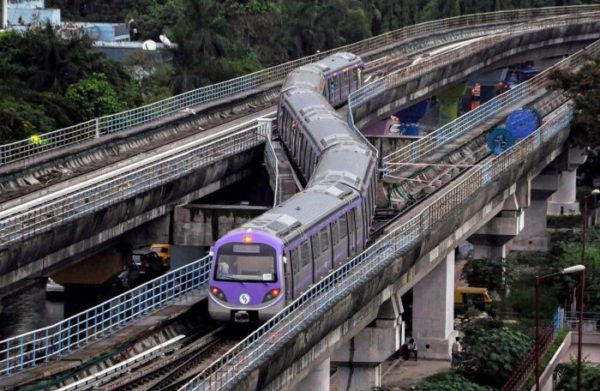 KOLKATA (Metro Rail News): Kolkata Metro has applied for inspection of the Commissioner of Railway Safety (CRS) for extension of the existing north-south service to Dakshineswar. CRS, under the ministry of civil aviation, gives the safety nod for any new railway project. Rail Vikas Nigam Ltd (RVNL), implementing the project, was eyeing pre-Puja commissioning, especially after the state government’s request.

“We have applied for CRS inspection. Hopefully, after the CRS’ inspection and clearance, the section can be unveiled by mid-November,” said an official. Engineers and labourers are working for more than 12 hours a day to give finishing touches to the stations and tracks. The two stations — Dakshineswar and Baranagar — are ready. “Decorative work of the interiors are being done. The stations are almost complete and ready for CRS inspection,” said an official.

The two new elevated stations are disabled-friendly, fitted with elevators and escalators. There are ramps leading to the ticket counters. As for the tracks, the laying work is over. The final alignment is being fixed. Some patchwork is left. The 4.2km track-laying on the viaduct was completed in September, following which cables for supplying electricity to the ballast-less tracks were being fitted. A crossover has been being installed to connect the Noapara carshed with the Dakshineswar-bound tracks.

The added section promises to ferry people living in north Kolkata. There’s a passenger interface with the Dakshineswar suburban railway station that runs parallel to the Metro tracks. The state government had earlier requested Metro Railway to complete the extended service by September so that the vacuum created by the demolished Tallah bridge could be filled.