New Town: Two residential towers in Mahisbathan of the New Town that stand in the way of the new Garia-Airport Metro link will have a small part, rail officials said Tuesday.

Officials at Rail Vikas Nigam Ltd, the 32km project implementation agency, said they would soon hire a consultant and an architecture firm to suggest how to cut a 3.2m-wide section of two Ramdhanu Apartment towers from the front.

The third tower in the urbanization will remain intact.

“The Ramdhanu complex is located between two proposed pillars of the viaduct in which the new Garia Airport link roads will be laid in. Unlike four other buildings in the vicinity, the residential towers do not need to be completely demolished. front of the two towers will infringe the viaduct, “said a railway official.

“A survey has indicated a 1.2 m violation, a safety clearance of 2 m must be taken into account, which means that a total of 3.2 m must be cut.”

This is the first engineering challenge facing any Metro project in Calcutta. “There are instances of cut buildings for infrastructure projects in other cities, but this has never happened in Calcutta … It’s a high-precision job, so we’re hiring consultants to find out how to do it.” said the officer.

Although only part of the two towers will be razed, all residents will have to be evacuated during the demolition.

“Once the railway authorities finalize their plan and inform us of their schedule, we will talk to the residents of the buildings about evacuation and compensation,” said Sabyasachi Dutta, the mayor of Bidhannagar Municipal Corporation. 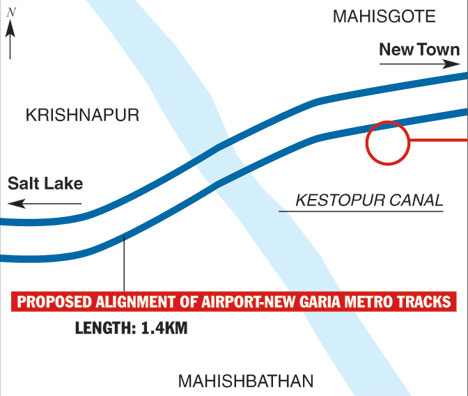 The two towers, both six stories high, of the Ramdhanu complex are the only residential buildings that stand in the way of the new Garia-Airport subway project.

Of the other four buildings, one housed a government primary school and was evacuated a year ago.

One of the other buildings housed a hotel and another a chain of commercial establishments. The demolition of all these buildings is underway.

Also on the list is another hotel, in connection with which the West Bengal Land Reform and Leasing Court ordered the status quo to be maintained until June 6.

Mayor Dutta said that the owners of the three private buildings, which partially or totally occupy the government plots, will receive the structural cost as compensation.

No compensation for the land will be paid because the buildings arose after the railroads acquired the plots.

Officials from the North 24-Parganas district administration said the Ramdhanu complex was built before the land acquisition notice was issued. “Then, the compensation will have to be calculated after talking to the residents,” said one official.

The first three floors of the two towers have commercial establishments, while the first three are occupied by 36 families, residents said.

Mukul Khan, a resident of the compound, said Ramdhanu was on a list accompanying a demolition notice sent by the district magistrate of North 24-Parganas three months ago. The last notice, issued on March 21, does not mention the complex.

The residents had moved the high court after the first notice, but the reason has not yet been heard.

“No one from the civic body has visited us to tell us what to do,” Khan said. 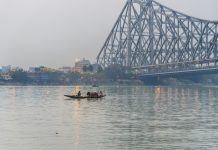 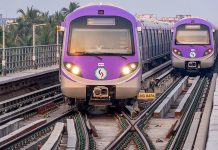 Cracks appeared in buildings of Bowbazar due to movement of TBM