KOCHI (Metro Rail News): Land acquisition process for Phase-2 of Kochi Metro from Jawaharlal Nehru International (JLN) Stadium to Infopark 2 is currently underway on a stretch of 11.2 km and is expected to be completed by December this year.

According to District Collector S Suhas, “A total of 386 parcels of land need to be acquired. Most of them are situated on the 10km reach between Palarivattom and Infopark. The 286 parcels of land will be handed over by August. The remaining ones on the 1.2 km between Jawaharlal Nehru Stadium and Palarivattom will be completed by December.  Kochi Metro Rail Limited (KMRL) had started preparatory works on land already handed over.”

Approval for Phase-2 of Kochi Metro is expected soon from Central Government, the proposal for which is already submitted by KMRL and at present, it is under consideration.

Regarding land acquisition for Phase-1B (1.163 km) of Kochi Metro between SN Junction and Tripunithura, the same will be completed in four months, the Collector said. 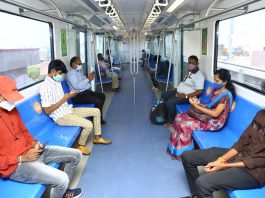