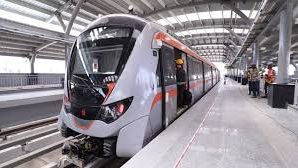 Principal Secretary Mukesh Puri, officials of the Gujarat Metro Rail Corporation and SMC Commissioner Thennnarasan discussed how to speed up the project and prioritise the works at the meeting.

SMC Commissioner Thennarasan said that to execute the work, we have fixed priorities. We first have to open an office for the Surat Metro Rail project and later we have to execute the plan. On the basis of a Detailed Project Report, which has been approved by the Central government, we have done a survey of the areas and lands to be acquired. In the coming days, we will start acquiring the land first from Dream City to Kadarshah naal and later in other areas. We will organise weekly meetings with officials of the metro rail corporation to review the work completed and decide what is left and how to do it.

The Surat Metro Rail project will be carried out in two phases. In the first phase, an area of around 21.61 kilometers from Sarthana to Dream city in Khajod will be completed and the second phase area will cover around 18.74 kilometers from Bhesan near Jehangirpura to Saroli.

Around seven kilometers of the first phase will be underground, and on the elevated corridor, there will be 20 metro stations. The second phase would be completely elevated with 18 stations, sources said. Tenders will be floated in the coming days to select consultancy firm for the project.
buy cialis professional online https://www.ecladent.co.uk/wp-content/themes/twentyseventeen/inc/en/cialis-professional.html no prescription

The metro rail project is expected to benefit lakhs of people. It would reduce air pollution from vehicles and traffic congestion if more people used the metro. Thennarasan said metro stations will be linked to city and BRTS bus services to provide streamlined connectivity to commuters.