Lucknow: His Excellency Mr. Milan Hovorka, Ambassador of Czech Republic to India today visited Lucknow Metro Rail Corporation (LMRC). He along with his delegation first visited the Charbagh Metro station where he was welcomed by Shri Kumar Keshav, Managing Director and senior officials of the Corporation.

Mr. Hovorka saw the world class state-of-the-art facilities provided by LMRC at the Metro station including the Automatic Ticket Vending Machine (AVTM), Recharge Card Terminal Machine (RCTM), Automatic Fare Collection (AFC) gates, escalator, lift with braille buttons and other automatic passenger oriented facilities. He was very much impressed with the facilities and praised LMRC for setting such a wonderful system at par with the European standards in such a compressed time schedule of just less than three year. 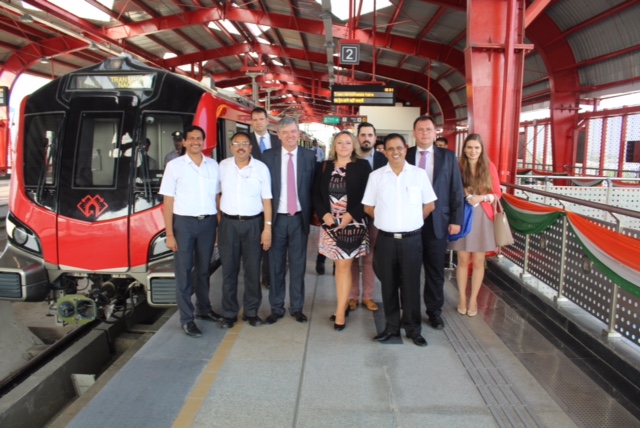 He then also took a ride in Metro train from Charbagh Metro station to Transport Nagar Metro station along with his delegation. Shri Kumar Keshav, Managing Director briefed the Czech Ambassador about the unique design and special features of the Lucknow Metro Train.

He was extremely happy to visit LMRC and wished the entire team of Lucknow Metro ever success. He was very appreciative about the success and achievements of Lucknow Metro under the leadership of Shri Kumar Keshav, Managing Director and felt immensely honoured to visit LMRC which has set such a world record of constructing and commissioning a Metro Project in less than three year.