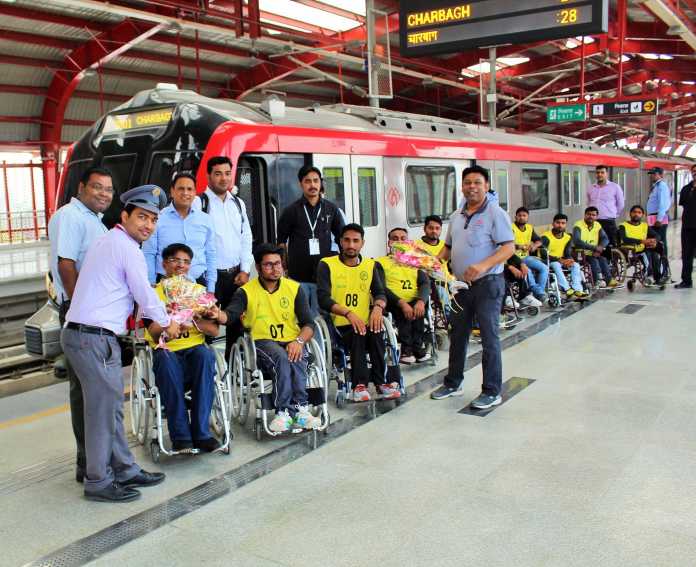 On the occasion of the World Disabled Day today, Lucknow Metro Rail Corporation (LMRC) organized a special Metro train ride for a team of para-sports players (wheelchair players) between Transport Nagar to Charbagh. It marked the observance of this exclusive day for these exclusive wheelchair bound cricket players who hail from different city and districts of Uttar Pradesh.

During their visit, they were briefed about the facilities available for the differently-abled at Metro stations and inside the Metro Train. They were very happy to see the specially marked spaces for them and talk the facility of the back button through which commuters can talk to the Metro train operators in case of an emergency.

Mr. Somjeet Singh, Captain, Para Sports Players (Cricket) said “We are overwhelmed to see such an advanced technology in the city of Lucknow. We thank LMRC for providing us with such a Metro system in the shortest possible time and giving us an opportunity to travel in the Metro train”.

“It is an unforgettable moment for us and we thank the Metro staff for their love, respect and affection that they have showered on us”, he further added.

Mr. Abhay Pratap Singh, Ex- Squadron Leader and now a player in the team said “We are very happy to see that Lucknow Metro is a completely ‘barrier-free’ public mode of transport and every care has been taken for them right from the ground level of the station to the platform & concourse level and also inside the Metro trains”.

Mr. Irfan Haider, another player of this special cricket team recited poems and songs impromptu in the Metro train to entertain everyone. Everyone on the train including the Metro officers and staff cheered and appreciated the lively nature of Mr. Irfan.