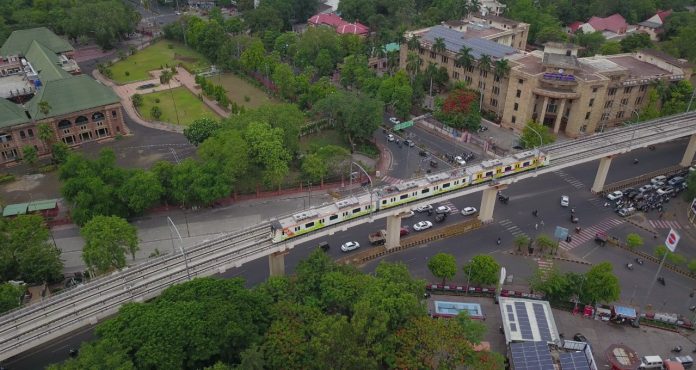 A distance of 1 km was covered at a speed of 20 km per hour. The work of signaling, overhead equipment (OHE) and track had been completed in this portion and proved to be perfect during the trial run. Work on remaining portion of Reach II is going on at full swing under leadership of Maha Metro Managing Director Dr Brijesh Dixit.

The train passed through Zero Mile Freedom Park station building, which will be 20 storied, located on the fourth floor. Special precautions were taken in the form of train supported on floating slabs to minimize the transmission of train vibrations to the building. Such unique feature does not exist in other Metros of India.

Maha Metro is developing Zero Mile Freedom Park and Kasturchand Park stations. A tender has been flotaed for the Zero Mile Freedom Park station for construction of a dedicated electronics goods market above the station. 21 shops will be built here. Around 2.40 lakh square feet commercial space will be created above the market on public private partnership (PPP) basis, tender for which will be floated soon.

Part of station as the Freedom Park will have theme of Indian Freedom Struggle and Indian Defence Forces. The station will depict various incidents and happenings related to the freedom Struggle of 1857 and 1947 – the year of Indian independence. These both momentous events have their historical legacy in the city. The events related to Nagpur in general and Civil Lines locality, in particular would be on display at the Freedom Park Station. A two-level basement parking is under construction adjacent to Kasturchand Park station for use of Metro commuters.

This portion of Reach II is very important as the track passes near prominent landmarks of the city like Vidhan Bhavan, Reserve Bank of India (RBI) and Kasturchand Park. The Zero Mile and Kasturchand Park stations cater to Civil Lines, which has a large number of government, semi-government and private offices. Thousands of people work in these offices.
Once Reach II becomes operational, people from various parts of the city will be able to reach their workplaces in Civil Lines using Nagpur Metro. Feeder vehicles like shared cabs, shared autorickshaws, e-rickshaws, e-scooters, low speed scooters, e-cycles, etc. will be available at Metro stations for last mile connectivity.