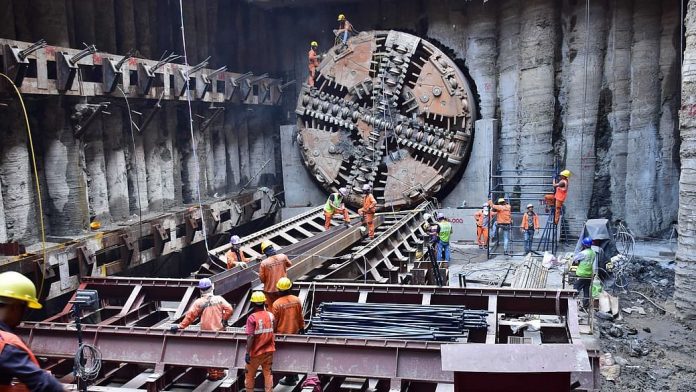 Pune, (Metro Rail News): On Saturday afternoon, MahaMetro’s second tunnel boring machine arrived at the Budhwar Peth (Kasba Peth) station, completing tunnel excavation operations on the Agriculture College to Budhwar Peth section. On the route for the Up and Down lines, two parallel tunnels have been excavated.

Ten days ago, the first tunnel boring machine (TBM) arrived at the Budhwar Peth site. Both machines covered about 1.9 kilometres.

Officials from MahaMetro (Maharashtra Metro Rail Corporate on Limited) said that almost half of the tunnelling work has been accomplished so far. The tunnel’s excavation on the remaining 2km stretch from Budhwar Pethto Swargate would be accelerated.

“In the first phase of the tunnelling project, we began excavating from Agriculture College to Civil Court. The second phase began in the Civil Court and ended at Budhwar Peth. We will finish the remaining tunnel work from Budhwar Peth to Swargate in the third phase “MahaMetro’s general manager (PR), Hema Sonawane, stated.

Another MahaMetro official stated that the excavation of both tunnels from Agriculture College to Budhwar Peth went without a hitch. The tunnels are approximately 18 to 25 metres below ground level.

The tunnels’ route has been marked. Other infrastructure including train lines, signalling and telecommunication cables, and power will now be installed in the finished portion of the tunnels, according to the official.
An official who spoke about the remaining work claimed that excavation of one tunnel from Swargate to Budhwar Pethhad had begun. The MahaMetrois intend to use a machine that has already arrived at the Budhwar Pethsite to dig the other tunnel.