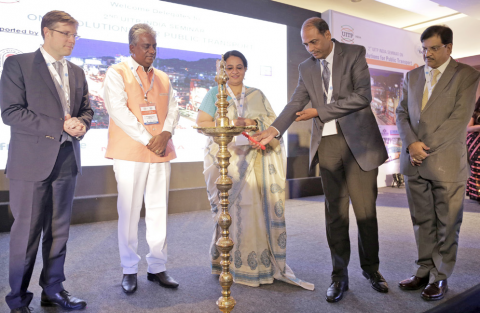 Bengaluru: The 2nd UITP India Seminar on IT Solutions for Public Transport held recently in Bangalore reflected the huge potential available to develop advanced ITS technology for improving the country’s public transportation system. Ably organized by UITP India under the leadership of Dr. Ekroop Kaur, Managing Director, Bangalore Metropolitan Transport Corporation, and Head, UITP India Board, the Seminar was hosted by Bangalore Metropolitan Transport Corporation (BMTC) and attracted luminaries from the transport sector across the globe. Metro Rail News was official Media Partner for this mega seminar on public transport.

In his opening remarks, Mr. Jerome Pourbaix, Director of Regions, UITP Brussels, said Bangalore is one of the most dynamic cities in the world which is why UITP decided to set up its Indian operations 10 years back in the Silicon Valley of India. Since the population in India is growing very fast, there is great potential for increase in public transportation system. There are three major trends which can drive transport systems in India, namely, use of ITS in public transport, funding of transport systems through various methods and focus on urbanization.

In her welcome address, Dr. Ekroop Kaur said after the success of first UITP India seminar on IT solutions a year ago, they were hosting the second such event in Bangalore. Today, ITS has become a buzzword with number of solutions offered including automatic signaling, channelizing traffic, counting ticket fares, etc., and is spreading into several new areas. IT solutions also offer number of benefits to optimize the operations of transport companies. BMTC, with a fleet strength of around 6,500 buses, has become a trendsetter in offering right solutions with GPS, sign boards for departure and arrival, mobile apps, which will help to find the bus routes, etc.