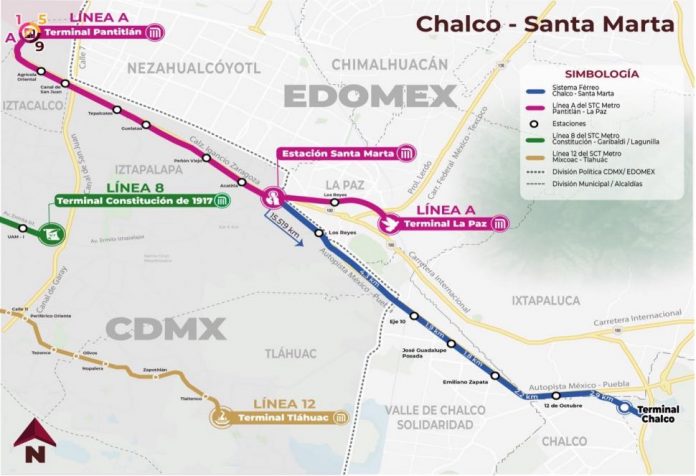 MEXICO (Metro Rail News): Mexico City’s mayor Claudia Sheinbaum has confirmed the construction of the 17.2 bn-peso (US$861mn) Chalco-Santa Marta suburban train, which starts from the extension of metro line A.

Works will start in 2022 and extend line A from Santa Marta station almost 16 km to Chalco municipality in Mexico.

“A very important investment will be made in line A as part of this administration, which the president will announce,” she said at a press conference.

“The Chalco-Mexico City link will also include the levelling of roads and additional support for improving the subway line. It is an investment that will probably start this year as an executive project and will probably be developed next year,” Sheinbaum said.

The confirmation follows the metro accident in Tláhuac district on May 3, which left 26 dead and many injured and sparked public complaints about metro failures and damage.

President Andrés Manuel López Obrador promised in November to finish the Chalco-Santa Marta rail link before the end of his term in 2024. But the recent accident at line No. 12 created uncertainty for the government’s portfolio of more than ten railway projects.

Mazatlán-based firm Senermex Ingeniería y Sistemas won in December the contract to carry out the advanced studies for the project, which should be completed during the first half of 2022 the tender specifications.

Communications and transportation ministry SCT is also carrying out pre-investment studies for a new trolleybus system in Chalco to complement the suburban train once it is completed.