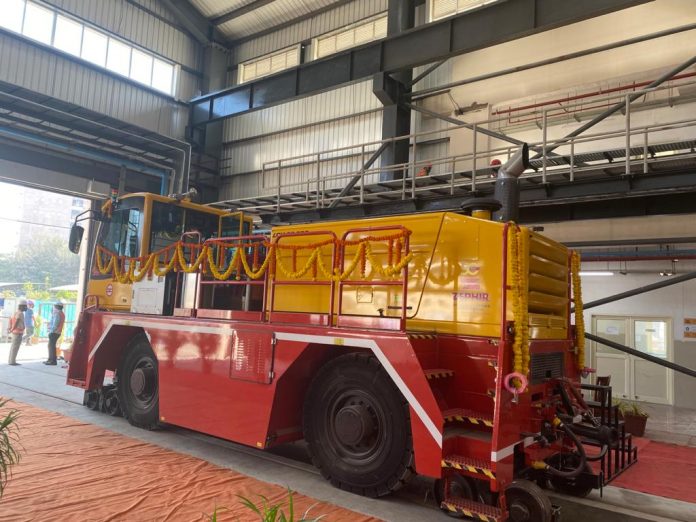 According to the MMRDA, the diesel shunting loco can haul eight-car train sets (360t), with radio remote control and hydraulically actuated braking system facilitating the shunting operations and maintenance work in the depot area. And with this, the MMRDA has initiated its first step towards the start of trial runs of Metro Line 2A (Dahisar to DN Nagar, Andheri) and Line 7 (Andheri East to Dahisar East) scheduled from January 14 onwards, said an MMRDA official.

The MMRDA is set to receive the first metro rake by mid of this month from Bharat Earth Movers Limited (BEML), an Indian manufacturer. According to the MMRDA, the workshop area at Charkop of Metro Line 7 and Line 2A is non-electrified, and therefore any placement or movement of train set or individual car in non-powered condition anywhere or inside the workshop area can only be performed by a diesel shunter or RRM. Thus the tractor will be useful for the same.

The company M/s Zephir Modena, Italy has manufactured the tractor at a cost of Euro 177.263 thousand. It is a battery-operated vehicle fitted with a three-phase electric motor, powered through a VVVF control drive. It can work on Road or Rail mode and can generate 50 KN drawbar pull on straight level track. When the battery is fully charged, it can work up to 20 km under the no-load condition and up to 9 km with a full load. The automatic coupler on one side and the semi-permanent coupler on the other side. The Battery recharging time is 10 hrs from the fully discharge condition of the battery while the battery life equivalent to 1500 charging cycle. It has SIFA safety features meaning if no movement of the driver is observed for 25 seconds, the RRM brake will be applied automatically.

Ajitabh Sharma is the new MD of Jaipur Metro

Ajitabh Sharma is the new MD of Jaipur Metro