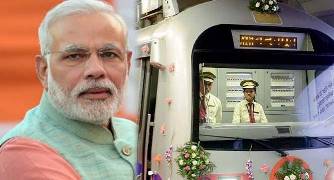 Mumbai: The Honourable Prime Minister Mr. Narendra Modi, today laid foundation stones for the Grand Memorial of Bharat Ratna Dr. Babasaheb Ambedkar and two Metro corridors – one running from Dahisar to DN Nagar and the other from Dahisar (East) to Andheri (East). “It was an honour for me to lay the foundation stone for the Grand Memorial of Dr. Ambedkar on the birth anniversary of Lok Nayak Jayaprakash Narayan, especially because Dr. Ambedkar was the architect of the Indian Constitution and Lok Nayak was the one who fought for its existence during emergency”, said an emotional Mr. Narendra Modi.

“I am also very elated to lay the foundation stone for the two Metro corridors as it was Dr. Ambedkar who, while analyzing Indian Railways had observed that the rail based transport can bring about social integration. Metro network is necessary for growing urban areas. While many may look at urban growth as a problem, I look at it as an opportunity”, said Mr. Modi further.