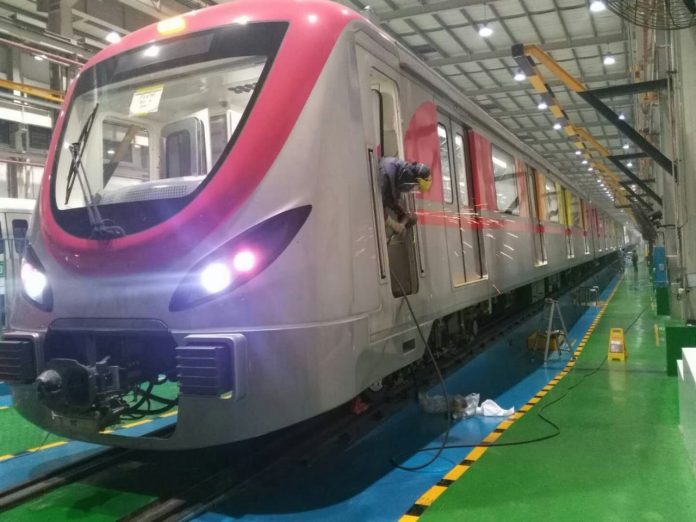 According to the plan, there will a total of eight trains which will be run in the 11.1 km long corridor between Belapur and Pendhar under the Navi Mumbai Metro project. Three more trains are expected to arrive in May and another three trains in August this year. It will have eleven stations and a depot-cum-workshop which is being developed at Taloja.

“the trial runs of these trains may begin in September-October as soon as contractors hand over stations,” Said CIDCO officials. Each metro train will have a three-coach-formation- Two DM (driving motor) cars-one in the front and the other in the rear, while the middle coach will be T (trailer) car.

The Navi Mumbai Metro rail project has been delayed much beyond schedule. The first phase of the project covers a distance of 11.1 km and it will have a total of 11 stations. This corridor will connect Belapur Railway Station to Pendhar Station near Taloja where the CIDCO is developing metro depot-cum-workshop. The cost of phase-I is estimated to Rs.3,063.63 crores.

Deepak Hartalkar, Cidco superintending engineer for Navi Mumbai Metro Project Said “The kits will be assembled at the depot. Individual coach testing will be done, followed by integrated testing. Once the stations are ready, we will roll the trains for track testing with safety inspections,

The Navi Mumbai Metro project started 011 at a cost of Rs 3,000 crore, has missed several deadlines and a new deadline of 2020 has been set for commissioning of the project. The work on the elevated span has been almost completed and the work on stations, signalling systems etc. are in progress.