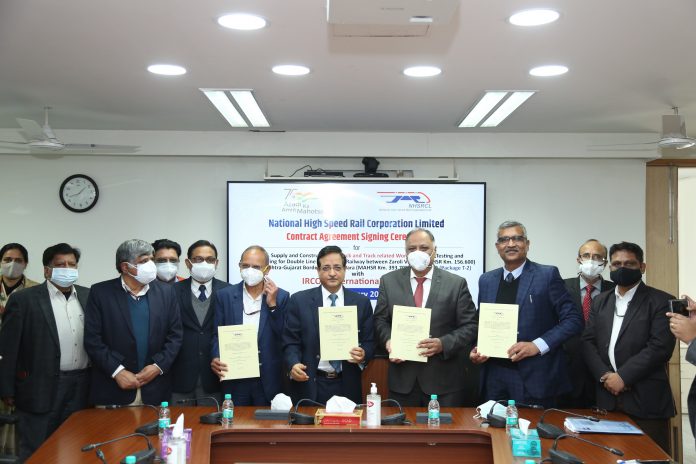 MUMBAI (Metro Rail News): The National High-Speed Rail Corporation Limited (NHRCL) has signed an agreement with IRCON International Limited for the design, supply, and construction of the track and track-related activities for the Mumbai-Ahmedabad High-Speed Rail corridor (MAHSR T-2 Package). It is 237 kilometres long and between Vadodara and Vapi in Gujarat.

The contract, which was awarded to an Indian company, M/s IRCON International Limited, intends to strengthen the Make in India effort. “We have received support from JICA in a very effective manner,” stated Satish Agnihotri, Managing Director, NHSRCL, in response to the development. I am grateful for the technical assistance provided by JICC, JARTS, and JRTC for the MAHSR project.” He stated.

“Under this contract, Indian contractors will receive transfer of Japanese Shinkansen technology, which will offer a huge boost to the Make in India effort,” stated MIYAMOTO Shingo, Minister of Economic and Development, Embassy of Japan in India.