New Delhi:  The NOIDA Metro Rail Corporation (NMRC) today signed a Memorandum of Understanding (MoU) with theDelhi Metro Rail Corporation (DMRC) as per which the DMRC will be assisting NMRC in their Operations & Maintenance (O&M) services/works of the 29.7 KM long NOIDA-Greater NOIDA Metro corridor. DMRC will be providing such services/assistance to NMRC till they develop the expertise to take over the operations and maintenance themselves.

The MoU was signed today at DMRC’s corporate office at Metro Bhawan by Mr. P D Upadhyay, General Manager (Finance)/NMRC and Mr. Vikas Kumar, Executive Director (Operations)/DMRC in the presence of Dr. Mangu Singh, Managing Director/DMRC and Mr. Santosh Yadav, Managing Director/NMRC and other senior officials from both the organizations.

The construction work of NOIDA-Greater NOIDA Corridor is already being executed by DMRC on behalf of NMRC. The Delhi Metro Rail Corporation (DMRC) is executing the project as the Project Management Consultant for the NOIDA Metro Rail Corporation (NMRC).  The civil works on this corridor consist of 29.7 KM of viaduct and 21 stations.

DMRC has been involved in the planning, consultancy or construction for almost all Metro projects across the country. The DMRC has already constructed the 9.25 KM Metro corridor for the Phase-I of the Jaipur Metro which became operational in June 2015. 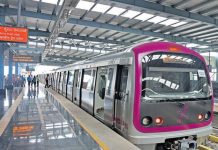 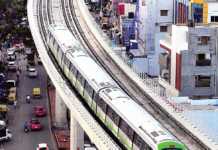