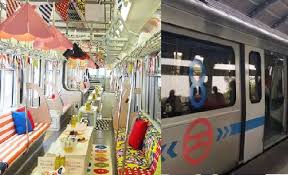 NOIDA (Metro Rail News): The NMRC announced on Wednesday that its coaches can now be booked for events. People can now book the Noida Metro coaches for birthday parties, pre-wedding and other celebrations, the Noida Metro Rail Corporation has announced.

The Noida Metro, which manages the rapid transport service among the twin cities in Gautam Buddh Nagar district, done the announcement on Wednesday as part of its “non-farebox” action.

“After the Hiring of Premise Policy for Film Shooting And Photography on NMRC premises, the Noida Metro has also formulated one more attractive policy for birthday party, pre-wedding celebrations and other celebrations on wheels which means that now Noida Metro in addition to mode of travel, will also become an accessible, attractive and affordable destination for entertainment and celebrations that too at a very reasonable cost,” the rail service officials said in a statement.

Interested persons can ask for one or more rail coaches to the maximum of four coaches in a train. To initiate the booking, they have to submit an application at least 15 days in advance that would be considered on a first come first serve basis, the NMRC stated.

“Once the booking is confirmed by the NMRC, the applicant would have to submit a license fee which will vary from Rs 5,000 to Rs 10,000 per hour per metro coach excluding taxes depending on the category chosen like decorated or undecorated coach in a running metro or a static metro etc according to the terms and conditions prescribed under the policy,” also added.

Although the applicants would also be required to pay a refundable interest-free security deposit of Rs 20,000 for the booking, the Noida Metro said. A maximum of 50 people, including adults and kids, shall be permitted per coach for any event.

The NMRC will give one centre table, dustbins and housekeeping staff along with a supervisory staff as deemed appropriate by it for a party, the rail service told.

“The applicants at all times would be governed by the guidelines as prescribed under the policy regarding security check, loss or damage to the metro property, hampering of operational activities, conduct, consumption of alcohol or use of fire, gunfire and explosives and others etc,” the NMRC stated.