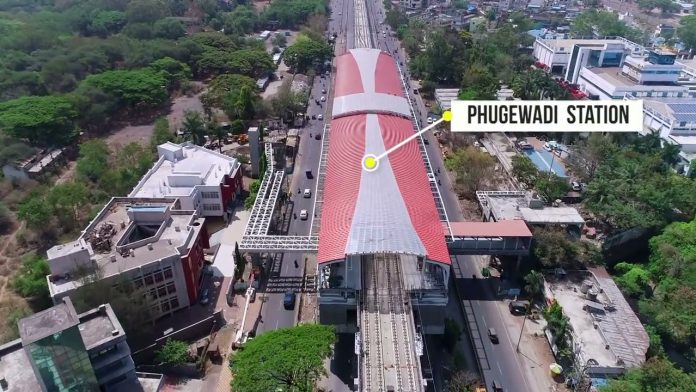 PUNE (Metro Rail News): The Maharashtra Metro Rail Corporation on Limited (MahaMetro) has finished 90 per cent of the Phugewadi Metro state and intends to finish the remainder in the coming days.

After Sant Tukaramnagar, Phugewadi is the second station to be completed on the Pimpr-Dapodi priority line. In the initial phase, Maha Metro intends to launch a full-fledged service between these two stations.

According to authorities, the majority of work on the interior of the station has been completed, including the installation of platforms and wiring. Work on the exterior or, foot over bridge, and stairs are now in progress. The station would initially feature two steps leading from the footpath on both sides of the road. More entrances will be added if needed in the future, according to authorities.

“We have accelerated work at the Phugewadi station.” The outside work will be finished soon. “At the spot, many agencies are collaborating,” stated a MahaMetro official.

“The station will have two floors,” the source stated. The first will house the concourse, where commuters may buy tickets or swipe their card. The platform will be located on the second floor. Escalators and a lift will also be installed at the station to offer convenient access to the concourse and platform. There will also be a waiting area and direct on boards.’

“The MahaMetro has already finished the building of the viaduct on the Pimpri-Dapodi line,” said Hemant Sonawane, general manager (PR) of Maha Metro. The building of stations is now the top priority. Other stations, including Pimpri, Nashik Phata, Kasarwadi, and Dapodi, are also nearing completion. The construction of a station is the most essential aspect of the Metro project since it entails a great deal of technical labour, such as the setup of control rooms for signalling, track monitoring, and commuter facilities.
buy stromectol Canada langleyrx.com/stromectol.html no prescription
“

The work on the through duct across the Mula River at Harris Bridge has begun, according to Maha Metro. After crossing the river, the Metro will proceed to Khadki.