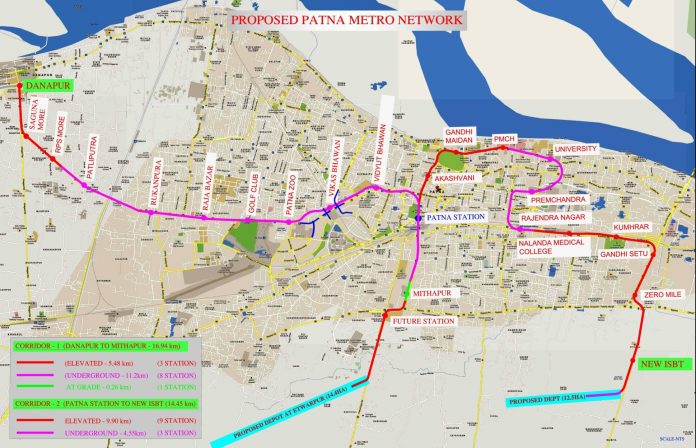 Patna, Metro Rail News: In a major boost to public transport in Patna, Narendra Modi government has Approves Patna Metro Rail Project comprising of two corridors on February 13, 2019. Patna Metro will be Bihar’s first metro and the mass rapid transit will surely become the major mode of communication in Patna. A Cabinet meeting chaired by PM Shri Narendra Modi has taken the decision. The cost of the project is estimated at Rs 13411.24 crore. The project is scheduled to be completed in 5 years.

Patna Metro Rail Project: All you need to know

The Danapur Cantt-Mithapur corridor will cover the areas located in the heart of Patna. The people residing in densely populated areas will have access to Patna Metro. Patna Metro stations will come up at Raza Bazar, the Secretariat, the High Court and the Law University Railway Station.

The 14.45 km-stretch of Patna station to New ISBT corridor will see an elevated stretch of 9.9 km and partly underground 4.55 km. This section Patna Metro will have 12 stations. Out of these 12 stations, 9 will be elevated and 3 will be underground.

Patna Metro will provide an alternative mode of communication to a population of 26.23 lakh. They are likely to be benefitted by the Patna Metro Rail Project directly and indirectly. The central government said that people residing in these areas will be able to travel on metro trains from one spot to different areas of the city conveniently.

The approved corridors will have multi-modal integration with railway stations and ISBT station and will have feeder network of bus, Intermediate Public Transport (IPT) and Non Motorised Transport (NMT).

The central government has stated that the Patna Metro rail project will have non-fare box revenue from rental and advertisement. Apart from these, there will be Value Capture Financing (VCF) through mechanism of Transit Oriented Development (TOD) and Transfer of Development Rights (TDK).