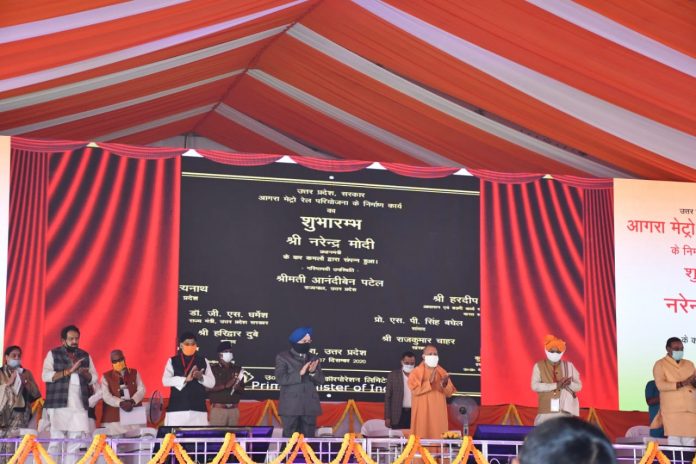 AGRA (Metro Rail News): Prime Minister of India, Shri Narendra Modi inaugurated the construction of Agra Metro Project via video conferencing today. He unveiled the Foundation Plaque followed by officially inaugurating the Rig Machine by pressing the remote button, marking the commencement of construction work of Agra Metro Project. Governor of Uttar Pradesh Smt. Anandiben Patel Chief Minister, Shri Yogi Adityanath, Minister of Housing & Urban Affairs Shri Hardeep Singh Puri and Secretary, Ministry of Housing & Urban Affairs Shri Durga Shanker Mishra graced the occasion with their esteemed presence in Agra at 15 Battalion PAC parade ground for the inauguration ceremony.
“In addition to the above, dignitaries including Minister of State for Social Welfare Shri GS Dharmesh, MP, Agra Shri SP Singh Baghel, Shri Udaybhan Singh, Minister of State for Khadi & Village Industries, MP, Fatehpur Sikri Shri RajkumarChahar, MP, Rajya Sabha Shri Haridwar Dubey, Managing Director of UPMRC Shri Kumar Keshav along with senior officials of UPMRC and others were also present for the auspicious occasion”, the UPMRC said in a statement.
Hon’ble CM Yogi Adityanath expressed his gratitude to Hon’ble PM Shri Narendra Modi and welcomed him on behalf of everyone present and the people of Agra. In his welcome address, he said, “This is a very auspicious day as Agra is getting the gift of a world-class metro system and I congratulate the people of Agra, UP Metro Rail Corporation and all those associated with the project on the inauguration of construction work of Agra Metro Project. It is because of relentless efforts by Hon’ble Prime Minister Shri Narendra Modi that development projects like these are being made possible in such a short span of time. The construction work of Kanpur Metro is progressing at a very fast pace. Similarly, Agra Metro will not only benefit the population of 26 lakh but also over 60 lakh tourists who visit Agra every year. I feel honoured to say that this is the beginning of a new era of development in Agra.”
Soon after, Prime Minister Shri Narendra Modi inaugurated the construction work of Agra Metro project by pressing the button from Delhi via video conferencing. In his address to the people of Agra, he said, “I congratulate you all on the inauguration of commencement of Agra Metro’s construction work. Agra has always been known to the world for its heritage and historical value, but with a world-class Metro system, Agra will now also be known for advancements. The city which carries a history of centuries is now ready to walk shoulder to shoulder with the pace of the 21st Century. To strengthen the position and economy of the city, many projects are already being executed in Agra and now this mega Metro project with a budget of over Rs 8000 crore will strengthen its vision of a Smart City. India has seen an expansion of Metro rail Network of around 450km in the last 6 years and it is targeted to reach a 1000 km mark by 2022. It’s a matter of immense pride that these metro rail coaches are also being manufactured in India which gives strength to our mission of a Self Reliant India and gives a boost to the Make in India vision”.

“A world-class Metro Project in Agra will not just enable ease of travelling for the locals and tourists, but will also help boost the economic sector of the heritage city. It is extremely important to empower small cities as they have ample skillset, raw material, production and service sectors and in such a scenario, development projects like these help small cities to grow and thrive at par with the big cities. With the hope that developmental works will continue to progress at the same pace, I once again congratulate you all on the inauguration of the ambitious Agra Metro Project”, the PM added.
The Agra Metro project comprises 2 corridors with a total length of 29.4 km. The first corridor of the Agra Metro is 14 km long and it will cover the stretch from ‘Taj East Gate to Sikandara’. The second corridor comprises a fully elevated Metro corridor from ‘Agra Cantt to KalindiVihar’ covering a length of 15.4 km.
Present on the occasion, MD, UPMRC Kumar Keshav said, “It is my and the entire team’s honour that Hon’ble Prime Minister of India inaugurated the construction of Agra Metro Project today. This is a very ambitious project and a gift of the Government to the city of Agra which holds both economic and cultural significance. We at UPMRC are determined to execute this project with all our might, just like we have delivered in Lucknow and the ongoing Kanpur Metro Project. No project can be executed successfully without the co-operation and support of the people of that city and I am very hopeful that the people of Agra will stand with us and co-operate as we take forward the construction of this prestigious Metro Project.”